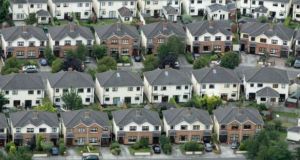 More than 90 per cent of homeowners are paying local property tax (LPT) based on property values of less than €300,000, according to figures from the Revenue Commissioners.

Local authorities will next month decide how much property tax to charge householders in their area next year. Councillors have the power to increase or decrease the rate charged in their area by up to 15 per cent each year. Their decision holds for one year only and if no notice of change is given to Revenue by September 30th, the charge reverts to the standard rate.

However, at the end of next year the tax will be recalculated to reflect the upturn in property prices, with tax bills expected to increase from 2020.

Last year, the four Dublin local authorities voted to cut the rate, with Dublin City, Dún Laoghaire and South Dublin applying the full 15 per cent discount, while Fingal applied a 10 per cent cut.

Most other local authorities made no change to the standard rate, but seven voted to increase the charge. Laois, Tipperary and Wexford county councils increased the charge by 10 per cent, Limerick by 7.5 per cent, Longford and Kerry by 5 per cent, and Waterford by 2.5 per cent.

More than 40 per cent of households, about 688,800 homeowners, self-assessed their property under the Revenue’s valuation, with Dublin households most likely to protest the Revenue’s assessment. However, more than 12,500 “self-corrected” their valuation upwards, the Revenue said, either following its challenge, or when the property came up for sale.

Fine Gael Dublin city councillor Paddy McCartan said the council should again apply the maximum discount next year, because of the “equalisation” process, where 20 per cent of Dublin money is shared out among rural local authorities.

“I don’t see why 20 per cent of Dubliners’ money should be going to other counties, and the amount that’s taken from Dublin is only going to increase unless the whole system is reassessed.”

LPT property valuations have been frozen at 2013 levels until October of next year, when a re-evaluation, which will effect charges from 2020, is due to be implemented. This June the average cost of a house across the State was €237,000 and €359,852 in Dublin.

“I think it’s unlikely that the rate of the tax will stay the same after the re-evaluation, but it is likely that people will be paying more and I think Dubliners have the right to expect that they will get bang for their buck and the money raised in Dublin will be spent in Dublin.”