Dublin Bus to stop refunding passengers who pay too much

Value of unclaimed change from transport company about €600,000 last year 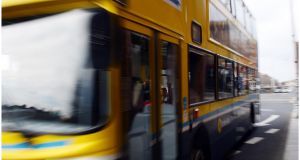 You will no longer be entitled to a refund if you overpay on a Dublin Bus from September 9th. Photograph: Bryan O’Brien

Dublin Bus will no longer issue refunds on fares from passengers who pay too much cash to drivers from next month.

Buses in the capital run on an “exact fare” policy with drivers unable to give change. The transport company issues refunds to those who seek them from its head office.

Its decision to no longer do so, announced on Wednesday, is part of a move toward a “cashless” service, it said, and encouraged people to buy Leap cards to pay for journeys.

It said the amount of change reclaimed by customers has continued to decrease. In 2017, 10.4 per cent of overpaid fares was sought by customers while the overall value of unclaimed change was about €600,000.

“If a customer overpays for their journey with cash after 9 September, the extra change will go towards continuing to improve our services and to local communities across the Greater Dublin Area through the Community Spirit Awards,” it said in a statement.

“The awards [have] helped almost 1,800 charities and voluntary groups through unclaimed passenger change since 2003.”

Fianna Fail’s transport spokesman Robert Troy said the move should be delayed until the cashless service has been fully implemented.