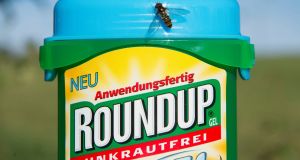 “Without these products, up to 80 per cent of the world’s food production would be lost,” says Miller. Above, Roundup. Photograph: Steffen Schmidt/EPA

Farmers and scientists need to use the tools of social media to far greater effect to counter myths being spread about food production and genetically modified organisms (GMOs) used in farming.

That is the view of Michelle Miller, former city girl working for Gucci turned farmer, who has become famous in the US for debunking popular myths surrounding food and farming.

To rebuild trust in food and understanding of the merits of GM foods, those developing and using biotechnology needed to use the same social media tactics of those who use fear tactics, she suggested at a conference in Dublin on Monday attended by leading plant technologists.

The response should include playing the celebrity card; using humour and “so do” memes that are so successful in making a case in the modern world; and even “fighting fear with fear” where it was warranted – but not resorting to name-calling. “Fear is easy. Science is hard, but people like it when they are comfortable with it,” she added.

Ms Miller, known in the social media world as “Farm Babe”, was described by Forbes magazine as “one of the biggest and most reputable voices for commercial agriculture on social media”.

She is a blogger with more than 90,000 followers on Twitter and she works on the family farm in Iowa with her husband, Doug, where they raise beef cattle and sheep, and grow corn, oats, alfalfa and soybeans.

She added that farmers and plant scientists need to step into the social media world when falsehoods are circulated, such as those made recently by actor Laura Prepon (with 900,000 Twitter followers) who tweeted GM corn was drenched in toxic chemicals and should not be fed to children.

It was undeniable that farmers today were using less toxic chemicals than ever before, Miller said, while organic farms used chemicals too and sometimes more of them compared with conventional farming.

The possibilities arising from herbicide-resistant crops enabled them carry out “no till [tillage] farming” on their holding, Miller said, which meant better soil and water conservation; reduced spraying of chemicals and less use of fossil fuels and fertilisers. Similar benefits arose with production of “nutrient-enhanced foods” using technology that could also help feed a world of nine billion people.

During recent controversy in the US about glyphosate herbicide (traded as Roundup), she wrote on her blog: “I’m a farmer. That’s it ... I don’t get funding from any big corporations, I have no agenda ... Yes, on our farm we grow field corn. Yes, sometimes we spray glyphosate, or other crop protection products [pesticides]. Without these products, up to 80 per cent of the world’s food production would be lost.”

“These activist groups want people to be scared of food, and as a farmer I have a problem with that,” she added. “We family farmers raise our children where we live. These farms are our family history and livelihood. Farmers’ kids play in their cornfields and proudly eat what they grow straight from the field. Why would they grow something harmful and purposely try and hurt themselves and others? (And why am I so healthy?)”

When they sprayed their cornfields it was at a rate of 22 ounces per acre, Miller said at the International Association for Plant Biotechnology conference. This is equivalent to less than two beer cans’ worth over an area the size of a football field. “We only spray two days out of an entire year at the beginning of the growing season, long before the edible part is present,” she said.

Yet activist groups wanted consumers to believe glyphosate was being found at “alarming levels” in food. On the case in which a former school groundsman in California, who claimed it contributed to his terminal cancer and was awarded $289 million, she questioned the circumstances whereby his employer allowed so much spraying of the herbicide. In contrast, farmers like her were “licensed and certified”, and trained in appropriate use of the herbicide.

To those who were now advocating a ban on Roundup, she would like to ask them if they wanted to “go back to harsher, older herbicides that we used in the 1970s”.

Miller agreed that when GMOs were first developed, scientists believed “the science would do the talking” and the benefits for consumers were not clear. She believed, however, that finally progress was being made on this front – though a better job still needed to be done in teaching children critical thinking at school.