Trains to arrive in Dublin suburb after 20-year delay 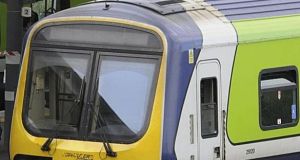 Pelletstown station was proposed in the late 1990s and in 2002 was earmarked as an 'immediate priority' in Irish Rail’s greater Dublin area integrated rail network plan.

A new train station in a growing Dublin suburb just 4km from the city centre, has been approved by Dublin City Council, 20 years after it was first proposed.

The National Transport Authority said it hopes to start work on the €6.5 million station at Pelletstown on the busy Maynooth commuter line next year with construction expected to take 18 months to two years.

The station beside the Royal Canal between Ashtown and Broombridge stations in Cabra, was proposed in the late 1990s and in 2002 was earmarked as an “immediate priority” in Irish Rail’s greater Dublin area integrated rail network plan.

The station was granted planning permission in October 2014, but remained unbuilt due to financial difficulties in Irish Rail. The area has changed significantly in the intervening years with a large number of new housing developments in Pelletstown at the northside of the rail line, the construction of a boating facility on the canal and the planned extension of the Royal Canal Greenway cycle path.

Reflecting these changes, Irish Rail submitted an application to the council last February to amend the station plans, including changes to plans for a footbridge over the line linking Ashington Park with Pelletstown.

The footbridge, which was part of the 2014 scheme, would give access to the station to residents in Ashington, a more established area on the southside of the rail line. The construction of the footbridge will eliminate a detour of more than a kilometre for pedestrians seeking to walk between Ashington and Pelletstown.

Irish Rail has had ongoing problems over many years, but particularly since development took off in Pelletstown, with people trespassing on the line at this point in order to take a short cut over the tracks and the canal.

Tragedy struck just over two years ago when a three-year-old boy and his father were found dead in a trench beside Ashington Park close to the unauthorised access point across the line.

Seán Sweeney (36) and his son Tyler Joyce drowned in just 10in of water in a ditch next to the rail line. An inquest last year heard that on on Easter Sunday, March 27th Mr Sweeney, carrying the child on his shoulders, had crossed the 9th lock on the canal, went through a fence beside the rail line and crossed over a wall into Ashington Park using a mud-path track. The track is next to a deep trench with a 10ft drop. The bodies of the father and son were found in the trench the following day.

Coroner Dr Myra Cullinane returned a verdict of accidental death for Tyler Joyce and a verdict of death by misadventure for his father.

The former farmlands at Pelletstown were zoned for residential development in 1998 and the provision of the railway station, in addition to the station which was built at Ashtown, was part of the justification for allowing high-density housing in the area.

In 2000, the council drafted a plan for the development of Pelletstown with the intention of reducing “unsustainable trends towards commuting and urban sprawl” and providing “housing at higher densities”.

In 2014, the Dublin Housing Taskforce identified Pelletstown as one of six areas in the city with the potential to accommodate new large-scale housing development, but noted it was constrained by a lack of infrastructure, specifically the planned train station.