Central Bank’s ‘jackpot’ of almost €350m for public to claim 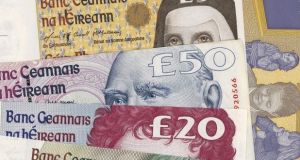 Eighteen years after the Irish punt ceased to be legal tender, a total of €347,404,127 in notes and coins still remains unaccounted for. Photograph: ThinkStock

The Central Bank is sitting on a jackpot of almost €350 million that it is waiting for the public to claim.

That is the value of old Irish money (in Irish punts) that is still “missing” and for which provision has been made in the unlikely event that everyone who has the old currency in their possession decides to swap it for euro.

Eighteen years after the pre-euro Irish punt ceased to be legal tender a total of €347,404,127 in notes and coins still remains unaccounted for. A punt is worth €1.27.

In the first decade since the changeover, about 150 people a week arrived at the Central Bank but the numbers are now negligible. Based on recent trends, much of it may never be claimed.

At the end of 2002 and the first year of operation of the euro notes and coins, 90 per cent of Irish punts had been withdrawn from circulation, leaving just under €463 million worth of old notes and coins.

Some Irish punts have been found in items of clothing donated to charity, in gardens when they are being dug for house extensions, under mattresses, in skips, in attics, and behind wallpaper when redecoration work is being done.

Anyone with old money can still exchange it for the equivalent in euro at the Central Bank’s headquarters on New Wapping Street on the North Wall Quay in Dublin.

By law the Central Bank must make provision for the possibility, however remote, that all €350 million will be returned for exchange and it will continue indefinitely to allow punts to be exchanged for euros for their face value equivalent.

The old notes handed in are shredded and recycled, and coins are melted down for reuse.