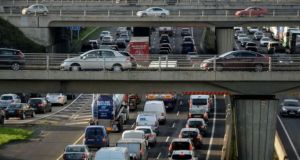 Major roads out of the capital and other cities are likely to begin getting congested by midday. File photograph: The Irish Times

Fog in some parts of the country on Friday evening has made driving home for Christmas difficult for many and prompted the AA to urge motorists to take extra care in areas including Mayo, Cork City, the midlands and Drogheda.

A status yellow fog alert has been issued by Met Éireann for the whole country and it will remain in place until 10am on Saturday.

The conditions have been hampering driving on what is set to be one of the busiest days on the roads over the Christmas period.

The AA urged motorists to “drive with extra care, using fog lights in any affected areas, but don’t forget to turn them off when they’re no longer needed”.

It reminded drivers that fog can make tail-lights seem further away than they are, and  said people would need to keep further back from the vehicle in front than they might normally.

Traffic in most urban centres was heavy through much of the afternoon and evening as a result of what the AA said was an “artificial rush hour” with tens of thousands of people starting the Christmas drive home.

While city centre traffic was lighter on Friday evening as the annual pilgrimage began, the major roads out of the capital and other cities were busier after lunchtime.

“Today is a little bit of a surreal day,” noted Conor Faughnan, the AA’s head of consumer affairs and general expert on Irish traffic patterns.

“A lot of people will say: ‘I am going to be clever and get out of here at lunchtime’ only to discover so has everyone else.”

Mr Faughnan noted that with a day and a half of work on Monday and Tuesday for many people, much of the spill onto the national road network will be tempered and spread out over the coming days.

“The [traffic] effect is there, but it’s diluted. If Christmas was on Sunday you would see massive traffic flows today,” he said.

Train services are expecting passenger flows similar to that of cars - that is to say, busy but manageable with people going home over a period of a few days.

As many as 400,000 Intercity journeys will be made across the network over the Christmas and New Year holiday period but Friday will not be as hectic as it might be.

“We will not have the type of pressure we would have on the Friday of a normal bank holiday weekend,” said Irish Rail spokesman Barry Kenny, noting that services would be at full capacity nonetheless.

Irish Rail typically sees a mirror effect - as demand peaks on longer distance trains, commuter traffic falls away. Much like the AA’s prediction of a “surreal” rush hour on urban roads, Dart carriages and those on other short-stop suburban services should be unusually spacious on Friday evening.

“This morning was relatively quiet; not empty by any stretch of the imagination but a noticeable drop off,” Mr Kenny said.

With late night Dart services continuing to ferry people home in the small hours, Irish Rail announced some changes to its services in the coming days.

On Christmas Eve, Intercity services will operate a regular service until approximately 8pm, while Dart and commuter trains will run on a Saturday timetable until about 9pm.

Commuter trains will also operate on Saturday times in Cork until 6.30pm. There are no services on Christmas Day or St Stephen’s Day.