Slow growth in retail sector as online shopping levels off 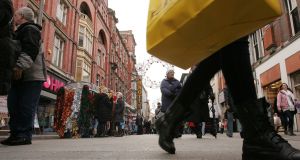 The battle between the high street and online shopping appears to be levelling off but Irish shops are still waiting for a bump in festive trade this week, Retail Excellence, the industry lobby has said.

Its updated trading figures due to be released on Friday will show growth of between 1 and 2 per cent for the year.

Although Christmas business has remained relatively flat “it’s all to play for” this weekend, according to RE commercial director JP Kennedy.

“Up until now it’s reasonably calm, probably no more than 1 or 2 per cent growth on the previous year, modest enough compared to the growth in the Irish economy of 6 per cent.”

While consumer spending behaviour does not necessarily follow economic growth, it should be close enough, Mr Kennedy noted.

As people begin the traditional last-minute dash for Christmas shopping, Irish retailers have not yet noticed any real increase on 2018 but that may all be about to change.

“This weekend is a massive weekend. It’s make or break, it’s all to play for,” Mr Kennedy explained.

“If the weather holds out and it’s dry, a lot of retailers are expecting a big weekend. A lot of people finish work today; it could be a slightly different story by Tuesday of next week. It could be up by 1 or 2 per cent.”

If there is one sign of an early gift to the bricks-and-mortar sector it is the first indication that online shopping might be starting to level off. A major existential threat to smaller businesses, any plateau in its market share would be welcome.

“I think it’s beginning to get overstated,” Mr Kennedy said of the threat, noting in particular yesterday’s Visa Irish Consumer Spending Index for November that showed a decline in online spending of 4.1 per cent for the year.

The report noted that for the first time since February, 2018 e-commerce activity registered a worse performance than face-to-face transactions.

“It will continue to be a really important part of retail but I do think a lot of retailers have fought back.”

That is not to dismiss the ongoing erosion of traditional shopping by online rivals. REI figures on Friday show that fashion, menswear and footwear have not fared well in 2019 - the younger, time-poor female demographic in particular looks to online options.

The threat is particularly acute to Irish businesses given up to 70 per cent of goods bought online by Irish consumers comes in from the UK.

“In fairness, Irish retailers are beginning to match these offers and putting themselves into a position to compete. But the UK online retailers have big resources,” Mr Kennedy said.

Elsewhere, coffee shops and restaurants have seen flat trade levels this year while the electrical sector - including big ticket items such as TVs and household appliances - has done well, as has furniture and flooring.

Food and alcohol trade has been positive in the big five supermarkets but smaller independent retailers have suffered an annual decline of about 5 per cent.