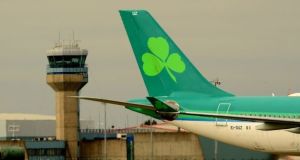 Passengers travelling on Aer Lingus flights are unable to fill reusable cups during cabin service due to health and safety risks, the airline has confirmed.

Speaking after it emerged that Irish Rail does not allow passengers to receive hot drinks directly into their own reusable cups, an Aer Lingus spokeswoman said the airline followed a similar policy but was reviewing its in-flight service to “facilitate sustainable alternatives”.

The airline is currently trialing biodegradable cups for some hot beverages and biodegradable packaging for some sandwich products while the company has reduced the amount of plastic used in boutique products by 23 per cent, she added.

A spokeswoman for Ryanair refused to comment on the airline’s policy around reusable cups on board its planes.

Irish Rail customers have criticised the service for continuing to use disposable cups rather than accepting people’s reusable cups for drinks on board trains. An Irish Rail spokeswoman defended its current policy on health and safety grounds, adding that there was also a limited supply of water on board trains.

The spokeswoman confirmed that catering staff on board tally the number of sales with the number of cups left. Irish Rail said in response to customer demand it had sourced keep cups that fit under the trolley spout and have a safe closing mechanism.

Last month the Government launched a public consultation on a range of levies on single-use coffee cups with proposals for up to 25 cent on a disposable coffee cup.

Brian McGrane from McGrath McGrane solicitors said he could understand why Irish Rail would be reluctant to use reusable cups on intercity trains given the risk of spillages and potential legal implications.

“If a person hasn’t been properly trained to pour into a cup there’s a possible liability because they have to manage the situation. When you order your tea or coffee they prepare it and put on the lid properly but if someone just presents them with the cup they’re not in control.”

Trains could consider introducing self-service stations but these would also be problematic given the constant movement of the train, said Mr McGrane. “You could have a self-service station with a notice to use this apparatus at your own risk but that seems extreme and probably won’t stand up to scrutiny in the courts.”

Mr McGrane is currently representing three cases regarding spillages of hot liquids and burn injuries but said it remains unclear how often these types of legal cases emerge.

A spokesman for the Personal Injuries Assessment Board said claims resulting from spillages were quite rare with only 10-20 claims of this nature passing through the board out of a total 33,000 claims per year.

Earlier this year an eight-year-old American girl who suffered significant scald burns when a cup of hot chocolate tipped on to her lap on a Ryanair flight settled her High Court action for €150,000.

The girl was travelling from Rome to Krakow in Poland with her parents when her paper cup of hot chocolate fell on her lap. A medical report stated the hot liquid pooled on the seat causing extreme burning. The child sued Ryanair through her father over the accident on the 2016 flight.