Engagement with arts every few months lowers risk of dying by 31 per cent, study finds 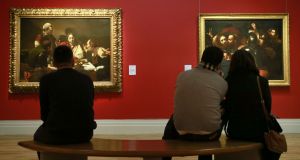 Researchers found that people who engaged in arts activities once or twice a year had a 14 per cent lower risk of dying at any time during the follow-up period, the BMJ reported. Photograph Nick Bradshaw

Whether it is a night at the National Concert Hall or a trip to the Abbey, those who embrace the arts are apparently far more likely to enjoy a longer life.

A new study published in the British Medical Journal found regular visits to museums, galleries, the theatre or concerts have a direct effect on one’s lifespan.

Quite simply, it says, the more often one engages with the arts, the lower one’s risk of death.

The journal noted that while previous studies have found that engaging with the arts can improve physical and mental well-being – including depression, dementia, chronic pain and frailty – its effect on longevity was not known.

Researchers at University College London set out to explore the association and examined data from more than 6,000 adults in England aged 50 years and over who were taking part in the English Longitudinal Study of Ageing (ELSA).

Exposure to various arts activities was measured at the start of the study in 2004 and participants were then monitored for an average of 12 years, during which time deaths were recorded using National Health Service mortality data.

“After taking account of a range of economic, health and social factors, the researchers found that people who engaged in arts activities once or twice a year had a 14 per cent lower risk of dying at any time during the follow-up period than those who never engaged,” the BMJ reported.

“People who engaged in arts activities more frequently (every few months or more) had a 31 per cent lower risk of dying.”

The authors of the report said the results of the research highlight the “importance of continuing to explore new social factors as core determinants of health.”

They argue that although everyone should have the chance to experience cultural activities, “the very people who have the most to gain from participating in the arts, such as the poorest and those with depression or loneliness, are least likely to do so”.

It is the latest study looking at how lifestyle factors affect older people. Last year, a report by the Economic and Social Research Institute found those whose homes have extensive sea views have a significantly lower risk of depression.