Hike in hotel prices reflected in Airbnb rentals, with one host charging €150 for a night on a couch 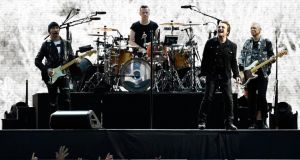 U2 perform during their Joshua Tree Tour, at Twickenham Stadium, London on July 8th. The tour comes to Dublin on July 22nd. Photograph: Dylan Martinez/Reuters

U2 are bringing the Joshua Tree Tour to Dublin this weekend, the only Irish stop on the tour that will reach 2.4 million fans. Croke Park has been a fixture for virtually all of U2’s Dublin shows and Bono and the band performed songs from The Joshua Tree album there in 1987, the year it was released. Tickets sold out in minutes and hotel rooms weren’t far behind – but Irish fans are paying dearly compared to fans in other European cities, according to a survey released today.

Dublin takes the title of being the most expensive city overall for hotel stays around a concert date when compared to Barcelona, Paris, Amsterdam and Brussels, which are all hosting the band in coming weeks.

U2 fans in Dublin are paying 53 per cent more for hotel accommodation over the concert weekend – July 22nd – than fans in other European cities hosting the tour, according to research carried out by travel search engine Kayak.

The average nightly cost for stays in the city’s three- or four-star hotels is €201. Demand for hotel rooms in Dublin shows an increase of 46 per cent when compared to any other weekend in July and a stay in the capital will cost visitors 28 per cent more than the cheapest weekend of the month, which is July 28th-31st.

Ahead of the tour coming to Dublin, travel search engine Kayak analysed the price per night for double rooms in three-and four-star hotels in the city and compared them to other European cities that feature on the tour.

According to Suzanne Perry, travel marketing expert at Kayak, the price increases come as “no surprise”.

“We are aware of the impact that an event such as a concert of a famous band can have on a city, especially one in their home town,” she said. “Our analysis indicates that it is going to be a very busy weekend in Dublin, as the city fills with music fans, even more so as it is the band’s only Irish date on the tour.”

Visitors still needing to book a room will struggle to find what they are looking for. At of Tuesday morning, the few listings available in the city on Saturday night range from €379 at the four-star Ashling Hotel on Arran Quay, €450 for the four-star Clayton Hotel at Dublin airport and €566 for three-star Cassidys Hotel on Upper O’Connell Street. However, moving out of the city centre, an upgrade to five-stars – at the Dylan Hotel in Ballsbridge – will save you €16 on Cassidys price.

Hosts on AirBnB aren’t missing out on the action either – of the 2 per cent of listings that are still available on the site for Saturday night, one is a couch for €150.

U2 aren’t the only musical acts driving up hotel prices. To coincide with Ed Sheeran’s 2018 Irish tour, hotels in Dublin, Cork, Galway and Belfast increased their prices by up to €300.

One hotel featuring on price comparison website Hotels. com showed a jump from €127 to €424, the largest difference of the hotels surveyed. This was for a stay in the Academy Plaza Hotel in Dublin. Price increases were visible across all the cities when compared to the weekends before and after the concerts.

Responding to those price increases, Dermott Jewell of the Consumer Association of Ireland accused hotels of “price-gouging”.

“You can’t keep fleecing people. It is entirely wrong and unethical for the hotel industry to think they can keep doing this. The Government helped them out in 2011 by reducing the Vat rate to 9 per cent and it is time for the Minister for Finance to review it,” he said.

“As always, the Irish Hotels Federation recommends that people book early to get the best value room rates and do not rely on just one source when comparing accommodation prices. It is also advisable for people to check hotels’ own websites, where prices are often better and promotional rates may be available.