Good food in economy? Six airlines making it happen (and one that has banned meat)

Flying economy doesn’t have to mean you starve on board. Some airlines don’t just save the best for business class 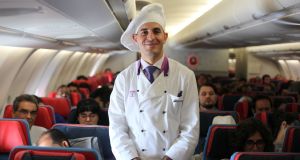 A ‘Flying Chef’ serving passengers on on a Turkish Airlines plane. The airline is just one of a growing numner that are bringing higher quality food to passengers. Photograph: Getty Images

Is it really possible for economy passengers on long-haul flights to look forward to the in-flight food? Now, on some airlines, that answer may be a “yes.” While back-of-the-plane cuisine doesn’t exactly have a reputation for being appetising, and amenities for economy flyers are increasingly few and far between, several carriers are taking the opposite approach by elevating their main cabin food on long-haul flights and, in some instances, the alcohol, too.

Many airlines promote their lavish meals and premium wines and liquors for first and business class passengers, said Paul Tumpowsky, co-founder and chief executive of the New York travel agency Skylark, but until recently, economy passengers have been largely neglected. Now, he said, tasty economy-class food is no longer an oxymoron. “Competition among airlines is growing by the day, and having good food is a memorable gesture that goes a long way in building a repeat customer base,” he said.

Serving generous portions of sumptuous, flavourful food in economy is a priority for this Asian carrier. Besides the two main course choices, there’s an additional “Deliciously Wholesome” menu of healthy dishes such as quinoa with ratatouille and chickpeas and Oriental-style steamed fish. Those who want to imbibe have their pick of top-shelf spirits.

Will it be wok-fried pork along with Smirnoff vodka on the rocks for dinner? Or is cuttlefish in a five-spice sauce and a Bombay Sapphire gin more your fancy? For economy passengers on this Taiwanese airline, these are just two of many food and beverage options. The selections always include one Western main course and emphasise seasonal ingredients.

All meals for economy passengers begin with an aperitif of a glass of Champagne along with salted biscuits, and the mains, such as chicken in a spicy sauce with baby vegetables, are usually accompanied by a wedge of Camembert cheese. Between meals, snack carts full of pastries and French chocolates are set up in the galleys, and on some routes, ice cream is served.

As a Switzerland-based airline, this carrier prides itself on serving economy passengers Swiss food and beverage items including chocolate bars, beers and wines. On flights originating in Switzerland, the carrier collaborates with Hiltl, the renowned Zurich vegetarian restaurant, to offer meatless meals like Thai massaman vegetable curry.

Authentic Turkish cuisine prepared daily from scratch is offered to economy flyers of this Istanbul-based airline. Turkish olive oil and butter, along with a different Turkish spice each month, accompany all breads, and main course selections might be shish kebabs or aubergine stuffed with ground meat. Sweets such as sultac (Turkish rice pudding) as well as freshly brewed Turkish tea cap off all meals.

Economy passengers can get a taste of Delta’s improved in-flight food on international and domestic US routes: The carrier now offers free meals on a dozen of its longest domestic flights. Flyers receive menus with three choices each for breakfast and lunch, such as a fruit and cheese plate and a whole grain veggie wrap. Next up for the airline: a more attractive culinary programme on international routes including possible partnerships with well-known chefs.

Meanwhile, Air India announced on Monday that economy passengers on domestic flights will now be offered only vegetarian meals, in a bid to cut costs.

This provoked uproar on social media.

GP Rao, a spokesman for the government-owned airline, said the change was made a week ago strictly to reduce waste and cut costs. But what people eat can be a sectarian flash point in India, especially since Prime Minister Narendra Modi and his Hindu-nationalist Bharatiya Janata Party took power. Many members of the Hindu majority are vegetarians, while the country’s Muslims and some other minorities eat meat. So the airline’s action was seen by many as discriminatory and part of a wave of religious nationalism sweeping the country.

Only veg food on Air India.
Next, flight attendants to speak only Hindi.
After that, stand for national anthem before flight take-off. #BMKJ

In India, diet is an important signifier of group identity. At the heart of the outrage over the airline’s policy is a widespread sense that India’s Hindu nationalist ruling party is trying to limit the freedom of the county’s minorities.

The government approved plans last month to privatise the airline, which has more than €7 billion in debt. Rao did not say Monday how much the change in meals would save the company. But in an interview with The Hindu, a major newspaper, an official for the airline put the figure at 80 million rupees, or about €1.1 million, per year.

Critics derided that as a drop in the bucket. Omar Abdullah, a former chief minister of the state of Jammu and Kashmir, wrote on Twitter that the move “will restore Air India to full health in.... oh heck 5,000 years.”

The step Monday was not the airline’s first away from serving meat. In January 2016, the airline replaced sandwiches with hot vegetarian meals for economy passengers on flights between an hour and 90 minutes long, The Press Trust of India reported, a change that the airline presented as an upgrade.