Which tourist destinations are the cheapest in Europe? 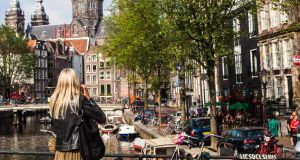 The price of a day out in Amsterdam is estimated at €78.69. Photograph: iStock

In news which will come as a shock to absolutely no-one who lives in or has ever visited Dublin, the city is not among the cheapest places in the Europe for a visit. However, it is still cheaper than Rome, London, Paris and - weirdly - Benidorm, according to a new pricing survey.

To work out which were the cheapest and the dearest of 12 of the most popular tourist destinations in Europe, the holiday booking website Alpharooms. com asked a simple question: how far will €50 get you when you are on your holliers. It looked at the cost of public transport, food and a selection of tourist attractions in various locations around Europe to reach its findings.

When the average cost of a breakfast, lunch, dinner, a beer, a cocktail, two one-way transport tickets and three attractions were totted up, the Turkish city of Antalya was declared the cheapest of them all.

All told, a tourist there can expect to spend a pretty precise €31.24 over the course of a day. The Czech capital Prague finished in a not too shabby second place where, according to the website, a visitor can get by on just €42.16 a day.

The daily cost of a visit to Istanbul was said to be €43.07, helping it to the bronze medal position.

After that prices jumped significantly, with Amsterdam and Vienna impossible to separate on €78.69.

And then came dear old Dublin. According to the pricing survey, a visitor to our capital who has a fairly modest day will still spend €81.79, a price which does not include accommodation.

The Dublin tourist attractions selected were the Guinness Storehouse, the Little Museum of Dublin and a - free - wander up and down Grafton Street and around Temple Bar.

By contrast, the cost of a day in Rome, meanwhile will set you back €84.33, with the tourist attractions visited being Colosseum, the Vatican and the Trevi Fountain.

There was no place for Barcelona or Madrid in the survey, and the only Spanish town represented was Benidorm where, according to the research, a day out would set you back €96.08, just eight cent less than the cost of a day trip in Paris.

And while the tourist attractions visited in Paris were the always impressive Eiffel Tower and the Louvre, the attractions in the Spanish city included a water park and Benidorm Palace - a place which is more of a cabaret venue than a palace.

In last place in the price league was London, where a tourist would barely make it to midday with their €50 allocation. The total cost of day out in the British capital was said to be €117.78. Mind you, with the city welcoming over 20 million visitors last year - up 4 per cent on the previous year - it’s unlikely to be overly troubled by the survey’s findings.

While the survey places Dublin at the wrong end of the pricing table, tourists travelling here still believe it represents good value for money.

The most recent figures from Failte Ireland show that, when asked to rate Ireland in cash terms, more than two-thirds of visitors from the US believe to be either good or very good value, with just 4 per cent believing it to be poor or very poor value.

Tourists from Germany and France appear similarly impressed. Just 11 per cent and 9 per cent of them respectively scored Ireland poorly for value, and those numbers have stayed pretty consistent over the last five years.

When it comes to tourists coming from Britain, however, the numbers paint a somewhat different picture.

The number of tourists from there ranking Ireland most unfavourably in terms of value for money has climbed to 14 per cent, with 44 per cent now rating it as good or very good value for money, down from a peak of 55 per cent in 2015.

Paul Flynn: I’d crawl over a mountain of nouveau-riche club sandwiches for a nice toastie
8