Max flights planned for tomorrow, next week and next month need to find new planes 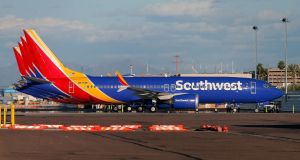 Leadership teams across the commercial aviation industry, including airlines, leasing companies and manufacturers, treat safety as a number one priority.

Aside from the obvious commercial reasons for such a stance there is a deep rooted moral element in executive minds too. It is simply unacceptable to operate flight equipment that risks the safe passage of men, women and children in the modern world. Period.

Such a mindset is hardwired in to the minds of senior aviation executives so the tragedy of Ethiopian Airlines ET302 last Sunday sent a shockwave through the collective management teams of the global aviation eco-system.

Not only has the event itself, causing the death of 157 people, cast a shadow across the industry’s safety record but the fact that it involved an almost new Boeing 737 Max 8 hit a particular nerve. That aircraft type was only introduced to commercial service in 2017, and it is the same airplane model operated by Lion Air of Indonesia which endured a fatal crash just last October with the loss of 189 lives.

For now, commerce and money have to step outside the door at Boeing

At times such as this regulators come into their own. It was the Chinese who correctly began grounding Max aircraft last Monday but that has spread rapidly to other jurisdictions. When all of Europe and, ultimately, North America followed suit a full-blown crisis unfolded for Boeing.

Airlines and lessors will ask regulators to give clear and unalloyed guidance forthwith. The question is simple. Is Max, in the aftermath of both flights ET302 and JT610 (the Lion Air flight), safe to deploy? Until the answer is an unequivocal yes operators will abide with the regulatory guidance.

Answering yes necessitates cast iron evidence that the Max does not have either a software-related malfunction that overrides safe pilot control or a fundamental design flaw.

In 2013, long-haul widebody B787 jets were grounded for 100 days while Boeing addressed issues with lithium batteries that caused fire risk. Not a single life was lost during that episode. Addressing the Max issues are even more fundamental given the loss of life in these two disasters. This issue will take time to resolve.

For Boeing, the two crashes pose a colossal challenge. The Max is now the spine of its commercial aircraft programme and has an order book for more than 5,000 jets with 78 airlines and leasing customers.

These planes have a sticker price of more than $100 million (€88.5m) each. That order book dwarfs the numbers sold of other Boeing aircraft including the B787 and B777. It ended assembly of the NG (New Generation) version of the 737 last year to make way for Max which it is now producing at increasing rates every month.

Boeing has a rich track record of introducing commercial aircraft to the global market. It pioneered transatlantic air services in the 1930s with its B314 flying boat that used Foynes in Co Limerick as a focal point. In the jet age, it invented the four-engine B720 and B707 models that created long-haul and inter-continental services. Those laid the path for the landmark B747 jumbo jet for which Aer Lingus was a launch customer in 1968.

On short-haul markets its tri-jet B727 was a best seller before the B737 was introduced in 1967. Over ensuing decades the 737 riffed from a classic variant through the NG (1990s) and on to the Max which began commercial operations in 2017.

In each case better power and range were delivered while lowering environmental emissions. Thousands of these aircraft were sold and have operated safely across markets around the world carrying hundreds of millions of passengers.

The Boeing 737 has been a highly reliable and safe aircraft for many years. In Europe, Ryanair has grown its fleet of 737s from nothing to 400 NGs (it has ordered 135 Max but none are in service currently) without a single major incident over 30 years.

In the US, Southwest has an even larger fleet of more than 750 737s and since the 1970s its safety record for a single type airplane has been unparalleled. The safety pedigree of the 737 is clear which makes the failures of Max over a relatively short period so concerning.

I don’t remember a time when a new commercial aircraft was introduced to the global market and became involved in two major crashes within a relatively short period of operation. For a precedent you have to track back to 1953 and 1954 when the UK manufacturer De Havilland endured two fatal crashes with its Comet passenger jet. Those were a calamity for the entire programme.

In the 1970s, McDonnell Douglas suffered three fatal crashes with its tri-jet long haul DC-10 and that programme was undermined by those disasters.

For now, commerce and money have to step outside the door at Boeing. Instead, its engineers must be given the headroom and resources to fix whatever has gone wrong with Max.

Utterances about “mandates” by the end of April from the Federal Aviation Administration, or a software package in the “coming weeks” from Boeing do not suffice. If this was a fault with an overhead bin in the cabin that might do, but not now. Instead, a front-to-back solution that solves the control problems evident in JT610, and apparently in ET302, must be delivered.

Moreover, a transparent explanation and solution set is needed to satisfy the most sceptical regulators not just in Washington but in Beijing, Addis Ababa and Jakarta too. Only then will airlines, lessors and, most importantly, passengers give the Max approval to return to service.

The Max itself is distinguished from its former NG derivative by having two all new engines that have added power and range, while sharply cutting fuel consumption and improving its environmental emissions. As a package it offers an apparently seamless segway from older aircraft to a new technology variant which has triggered demand from many airlines worldwide as a replacement for existing fleets or for expansion purposes.

Behind the exhaustive testing and trialling that Boeing itself completed while developing this jet, regulators around the world would have put the aircraft through a deep set of audits and flight tests to ensure it was fit for purpose in the world of commercial aviation.

American, European and increasingly the Asian aviation authorities adopt highly demanding examinations for any aircraft entering line service. Aircraft of this type are subjected to physical stresses in testing on the engines, wings and airframe that vastly exceed any experience in a normal or even turbulent flight.

Moreover, for a long time commercial jets have been designed with multiple back-up or redundancy systems that ensure safe flight even when critical power or control systems fail. This is why the Max crashes are now so troubling.

What actually happened on ET302 remains a matter of conjecture. We are guaranteed that tracking equipment of the flight itself, coupled with voice and data recorders designed to survive extreme crashes, will deliver information that allows a conclusive analysis of the causes. Unlike Lion Air JT610, which entered the waters of the Java Sea, ET302 hit the ground. All parts, no matter how damaged, will be forensically assembled and examined in extremis to determine the actual cause of this crash.

The commercial consequences of these disasters are hard to calculate but they are material. Short-term, the grounding of 350 aircraft causes huge logistical problems for airlines around the world.

Flights planned for tomorrow, next week and next month operating Max equipment now need to find alternative planes to service those routes. Load factors, a measure indicating the percentage of available seats sold, are at record highs globally so the room to accommodate passengers off Max are limited.

There are only 24,000 commercial aircraft in service worldwide and few of these exist as spares. Either airlines cancel flights, lease in older equipment or re-jig their fleets to manage short-term pressures.

For lessors, who have ordered more than900 Max aircraft, an automatic review of their commitments will now take place. Leasing companies invest in commercial aircraft on the assumption they will have reliable working economic lives of up to 25 years.

Any question marks about that longevity can undermine their investment case. Lessors also prefer to own assets that operate in so-called deep and liquid markets. These are defined by having multiple airline customers and selling in large volumes.

If any of these criteria are threatened the status of an aircraft as an investible asset can be queried. Hence, lessors will be as demanding as airlines in seeking unequivocal answers to the questions posed by the two fatal events.

Commercial aviation is statistically proven as the safest form of mass transport worldwide but that fact provides no solace to anyone connected to the Lion Air and Ethiopian disasters.

It is now incumbent on Boeing and regulators to provide an evidence-based solution which can provide consumers with the assurances needed to board a Max. Until then, groundings of the aircraft are an appropriate and proportionate response. Anything less would be tone deaf.

Joe Gill is director of corporate broking at Goodbody Stockbrokers, where he specialises in aviation