Walking holiday? I ended up looking like a demented Moses

Stunning landscape, warm sunshine and getting hopelessly lost, hiking in Majorca’s mountains had its ups and downs 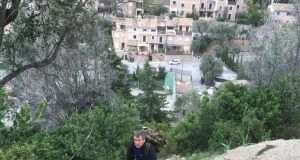 Conor Power retraces his steps after getting lost near Deía in Majorca.

When two friends suggested a week-long walking holiday in Majorca, my initial reaction was “What . . . a staggering tour of beaches and nightclubs?”

I was confused because my vision of Majorca up to that point was of a flat sunny island somewhat closer to purgatory than to paradise. A quick bit of research revealed that not only does Majorca have actual mountains, but its highest peak (Puig Major, 1,445m) is 400m higher than Carrauntoohil.

The Serra de Tramuntana range runs along the north-west edge of Majorca. As our plane approached, it was this deeply dramatic first impression that greeted us, illuminated in cinematic fashion by the setting sun. As the pilot manoeuvred around the craggy peaks to approach Palma Airport over the flat fertile plains, I had a quick look around the plane. The passengers seemed to be roughly divided into two groups – one composed of excited walkers and cyclists and the other of equally excited people who already looked a bit sozzled, some with cigarettes in their ears. Who would go to paradise and who would go to purgatory?

After an overnight stay in the lively and historic city of Palma, we took a 45-minute taxi ride to our starting point at Estellencs. The full Dry Stone Route (Ruta de Pedra en Sec in Catalan, or the GR221 by its international name) goes for 150km along the north-west spine of Majorca from Port d’Andratx to Pollença. We were following an 80km section in the middle that one week’s hiking would allow.

My companions – both Frenchmen – were seasoned walkers. For them, this trip was to be one in a series of walking holidays and easily the toughest. Even though I had done some training in the hills of west Cork, I hadn’t done walks of more than two hours. We were facing into a programme involving hikes of up to 21km per day and a minimum of four hours in length. I would also be walking with the added burden of a 10kg rucksack containing all my belongings.

The first day’s hike from Estellencs to Esporles was a wonderful, gruelling trek with the sunlight playing on the green hills, the blue sea, the shady woodland, the bright bauble-like fruit of the lemon trees and the multiple groves of gnarled ancient olive trunks.

After an evening in Esporles in the company of some colourful, friendly locals, we slept like weary troops in the Son Trias refuge before getting up the next day to take on the next section of the route.

In contrast to the first part, between Esporles and Valldemossa there is almost a complete absence of the wooden fingerpost signs that indicated the direction, distance and approximate time. We all got lost, splitting off in different directions. The other two ended up on the public road while I embarked on a solo nine-hour odyssey under the Balearic sun, getting lost, redoubling over routes trying to find subtle signs amidst the rocks and trees, clambering over walls and coming very close to calling an emergency number before finally finding the way back down the mountain into Valldemossa. Perhaps most tragically of all, the bread that I was carrying didn’t become reunited with the ham and cheese in Jean-François’s rucksack until 7.30 that evening.

By way of research, I had been reading A Winter in Majorca, written in 1841 by George Sand. It’s a fascinating account of her impressions of the island long before mass tourism. It omits any detail of her affair with Polish composer Frédéric Chopin, whom she famously met in Valldemossa. The town was every bit as charming as Sand had described it in her book.

It was a welcome night of rare luxury on this occasion as we were staying in the very relaxing and recently-opened Cas Papa boutique hotel. It’s housed in a refurbished traditional Majorcan house that had all the characteristics described in Sand’s book from almost two centuries previously. The writer herself had stayed almost right next door in the complex of buildings that make up the former monastery, from which all religious had been unceremoniously ejected just two years before her arrival.

I took the next day off to recover from my unplanned adventure while the two Frenchmen got lost again on the next section of the walk from Valldemossa to Deía. Meanwhile, I had a look at the former monastic cells where Sand and Chopin canoodled and which is now the Chopin/George Sand Museum. It was a low-key and suitably old-fashioned kind of visitor centre in the former monastery, with peaceful vaulted ceilings and traces of the island’s Moorish heritage evident in the colourful ceramic floor tiles. The great composer’s piano was one of the centrepieces of the exhibition, which featured a lot of original correspondence from him as well as original sheet music, paintings and photographs from the period.

Deía – our next stop – was even more authentic and laid back. Set into a huge crevice facing the sea and with the towering mountains forming a brooding backdrop, the village has a long history of attracting leading lights of the arts. English novelist Robert Graves is buried here, while more contemporary luminaries to visit include Richard Branson, Caroline Corr and Fionn Regan.

We set off again the next morning, full of determination not to get lost the third day running. We then got lost for an hour and a half, scrambling up craggy physical obstacles past docile mules to get back on track. After that, it was a very pleasant and well-signposted hike through stunning landscape to the wonderfully-situated refuge at Muletta, overlooking the great sweep of beach and harbour of Port Sóller.

An old-fashioned tram takes you from Port Sóller to Sóller. It’s an instantly alluring old town but we had a 21km trek to complete so off we hiked up the hill. The three hours of constant climbing are tough going, even though the mystical caves and views of Sóller and the sea are rewarding in their own right. Once you reach the top at the Col de l’Ofre, however, the greater satisfaction comes in the knowledge that you have essentially level ground after this, with just the occasional moderate climb to the most isolated of the refuges at Tossals Verds, from whose terrace the panoramic views of pastoral paradise would make you weep.

The final day looked easier on paper but ended up being the toughest and most scenic of the lot, taking in the highest mountain pass (col des Prat) and a long descent over varying terrain.

About 4km from the finish line, my body finally caught up with me in the form of what one passing walker diagnosed as “an inflamed ligament” in my left knee. I finished the journey down into the peaceful monastery of Lluc dragging my left leg and using a large branch as support, looking appropriately like a demented Moses.

Everything moves so fast in our lives in general that embarking on a journey involving walking  . . . gives you a rare philosophical and even spiritual experience

Had I known how tough it was, I probably would have organised buses and taxis and only done half of this route. But because I did it, I returned home stronger and fitter than I’ve felt (ligament problem aside) in a long time. It also got me thinking in a different way. Everything moves so fast in our lives in general that embarking on a journey involving walking continuously for hours on end gives you a rare philosophical and even spiritual experience. Either that or the altitude was messing with my brain. In any case, I’m hooked. There’s no point in chasing paradise – the perfect break involves equal doses of paradise and purgatory.