Magazine readers vote for the best Irish hotels. Which ones made the cut? 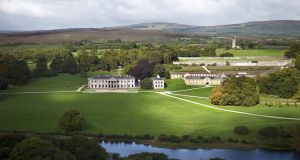 Ballyfin in Co Laois: the best hotel in Ireland.

Ballyfin in Co Laois topped the list of best Irish hotels as voted by the readers of Conde Nast Traveler magazine. Six other five-star hotels scored strongly in on the list for 2017. Three four-star properties were rated in the top ten for Ireland.

The top hotels in Ireland included, number one, Ballyfin with a score of 98.63 – Ballyfin was top hotel in the world last year. The Lodge at Ashford Castle was number two and also appeared on the top world list, with Waterford Castle last year.

Other hotels on the list are Solis Lough Eske Castle, the only five-star hotel in Donegal and celebrating ten years open in 2017. Waterford Castle on its own island was number four and The Shelbourne came in at number five.

The stately Killarney Park Hotel holds its own among the many five-stars of Kerry and it was number six on the list. The Merrion in Dublin celebrating 20 years as a hotel is number seven.

The four-star Clontarf Castle at number eight “is delighted to feature on the list for the first time,” said general manager Jason Ormston. He went on to say, “an award like this based on votes from the most important people – our guests – is a wonderful tribute to all the hard work and dedication of the whole team at Clontarf Castle Hotel.” Clontarf are celebrating with a special rate of €249 for two, with dinner, bed and breakfast, clontarfcastle.ie.

The final two five-star hotels in the Top Ten for Ireland are the Westbury Hotel and the Intercontinental Hotel, Ballsbridge.

The top hotel in the world is La Reserve in Paris, a 40-room hotel just a block from both the Champs-Elysees and the rue du Faubourg Saint-Honore. You can experience an overnight in La Reserve on the “Dreams and Savors” Package that includes a night in a Prestige Room, a glass of champagne, dinner in the two-star Michelin restaurant Le Gabriel and continental breakfast from €1,250 for two.

The exclusive Irish property Ballyfin, winner of the top hotel in the world last year was named 13th on the world list. Ballyfin offers full board, leisure activities and overnight in a deluxe room from €995 for two at weekends and €880 midweek.

The Readers’ Choice Awards will be published in the November issue of Condé Nast Traveler available on October 24, 2017. The full list is published online at www.CNTraveler.com/rca.

Róisín Ingle: Five ways to find joy in a pandemic. Only one of them is illegal
4