Walk for the weekend: Away from the coast, the vista is a thing of rugged natural beauty 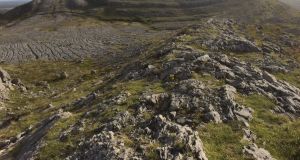 The essential Burren is, for most, a coastal excursion between Doolin and Ballyvaughan with, perhaps, a return over famous Corkscrew Hill. Undoubtedly, this is one of Ireland’s great scenic routes, offering intoxicating views to Connemara and the Aran Islands, but it isn’t the outing that truly floats my boat. To get close and personal with this austerely attractive place of stone, I head instead to the huddle of rounded hills and mutating turloughs that comprise the east Burren.

Parking recently at Cooloorta Cross, I rambled south along a Famine relief road that, like most of its kind, leads precisely nowhere –such back-breaking effort from a starving people for no purpose.

After a short distance, walking arrows conveyed me right and gently uphill past a malodorous couple of puck goats doing their best to look pugnacious. I’m not falling for it, however, since the feral goats of the Burren are actually inoffensive, if controversial creatures. They are accused by some of damaging stone walls and destroying grassland, but I can’t help feeling that something would be lost if these shy creatures were no more.

Then, it’s on over an incongruously green hillock amid the otherwise deceptively rich harshness that is the soul of the Burren. At a gap in a wall, the arrows point left, but I go north-west to ascend benches of fractured stone, where easy scrambling conveys me to the cairned summit of Slieve Roe.

When a Cromwellian officer described the Burren as “a country where there is not enough water to drown a man”, he couldn’t have been describing the east Burren, for immediately it occurs to me that the sweeping vista from Slieve Roe encapsulates enough liquid to drown an entire army. This water lies mostly within turloughs: a landscape feature that is almost unique to Ireland’s west, consisting of small lakes, where levels rise and fall with startling rapidity.

Now, it is directly south by descending great swirls of constricting limestone that seem determined to choke the hill. Eventually I reach a col where directly above me lies Mullagh More, the queen of the Burren, which immediately reminds me of a giant wave breaking on a limestone beach.

Beyond a stone wall, I tag walking arrows right, then left and up a small cliff to reach the unexcavated burial cairn marking Mullagh More’s expansive summit. Gazing down, I ponder once again upon the enigma of the Burren; a stunningly attractive but severely degraded glacio-karst landscape that has been created, in part at least, by agricultural over-exploitation.

The modern paradox is that otherwise unsustainable practices, such as intensive grazing, are now being re-introduced here to prevent this fragile ecosystem succumbing to its natural state as a monocultural hazel forest.

Departing the summit, I descend north-east to reach a stone wall, where I tag the walking arrows to gain the gap in the wall encountered earlier. Here, I pause to imbibe the rich embroidery of the vista: the startlingly intense blue of the Skaghard and Trevaun turloughs; the eyewatering brightness of the limestone and beyond the drumlin-speckled green of the Gort/Kinvara lowland. Then it’s blissfully back to my start point.