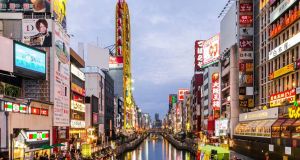 The job of a lifetime is up for grabs – though if you’re interested, you’ll be fending off competition from travel lovers around the world.

The New York Times is looking for a person to spend a year travelling the world to create a dream itinerary of destinations for its readers.

Every year the newspaper selects 52 must-visit places for readers, whether a new starchitect-designed museum or culinary treasures to try, an unspoiled beach, or places to see animals in the wild.

However, for the 2018 wish list, it is inviting one ambitious traveller to turn the destinations into a perfect itinerary. They are seeking a correspondent who will go to every destination on the list and tell readers the story of each place and the story of life on the road.

The list has been running for 13 years and every January, the 52 destinations are drawn from suggestions made by the newspaper’s writers, editors and a wide circle of contributors. Readers are invited to add their suggestions.

The ideal candidate will be “a permanent student of life, an astute documentarian of the world. This person should have a well-worn passport, the ability to parachute into a place and distil its essence and to render a compelling tale with words and images.”

Media experience is required, as is fluency in English, expertise in social media and facility with digital devices. Languages other than English are a plus though not a requirement.

Qualifications would include having travelled to several destinations, having documented your travels in writing, social media and prior experience of magazine, newspaper, publishing companies, digital publications, film or other media organisation. Candidates must be able to commit to working on the project for a full year.

The salary has not been disclosed. Jordan Cohen, Director of Communications at the New York Times told The Irish Times: “This position is a first of its kind for The Times and yes, it is a paid position, but we cannot disclose the exact salary”. However, the average salary for a general assignment reporter on the New York Times is around $77,000, according to salary website paysa.com.

The top five places on the list for 2017 were Canada, Atacama Desert in Chile, Agra beyond the Taj Mahal, Zermatt in Switzerland and Botswana.

Other places on the list included Penzance in Cornwall, Chiang Mai in Thailand, Lofoten Islands in Norway, Comporta in Portugal, Cyprus, Madrid and Kingston in Jamaica. You can apply on nytimes.com/travel.

Hilary Fannin: Will you help send these Irish children back to school?
5

Two to savour: A German Riesling and an Austrian Zweigelt, each for less than €8
9