An off-road cycle and wonderful scenery in Cork 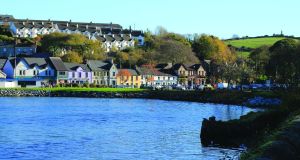 This cycle – which can be done in less than three hours – begins in Cork city centre. Start at the junction of Albert Quay and Victoria Road near the Idle Hour pub. This is frequently a very busy quay as ships unload their cargo – often timber. Look north across the river to the suburbs of Montenotte and Tivoli – named after towns in Italy.

It’s not possible to cycle along the river as there are several commercial premises. Instead, cycle to the end of Victoria Road and take the first left onto the leafy Centre Park Road. This road would have boulevard status were it not for the multiple potholes and tree roots that penetrate its surface, but there is room for two-way traffic.

The road comes to a T-junction and the elegant River Lee, which has risen 90km west in the Shehy Mountains on the Cork/Kerry border. At this point, it is a languorous river on which you variously see rowers, pleasure craft and commercial shipping. Across the river are the Tivoli Docks, with giant gantries unloading cargo. Pass Cork’s GAA stadium on the right. Páirc Uí Chaoimh, at the time of writing, is undergoing a huge reconstruction.

Very soon, the poorly surfaced road brings you to Blackrock pier. Press on to the castle along a better-surfaced road past a string of period homes on the right. The castle has undergone many transformations, from a private dwelling to its current status as an observatory. From here, a lovely meandering public pathway brings you to a T-junction after 4km. Go left.

The path is very popular with walkers too, so take care. Go left (not right) at the road junction, past the Rochestown Inn onto the main road, the R610. After 1km, cycle to the left and the start of the old Passage West-to-Cork railway which has been converted to a walkway/cycleway. With Lough Mahon on the left, proceed to Passage West and join the main road across a small park. Press onwards to Monkstown. Pass the cross-river ferry to Cobh (see Route 5).

Stay on the road till a sharp left brings you above the water. After 1km, it intersects the N28. Continue through the junction for 2km and swing right when you meet the R613 at a T-junction. After 2km, take a left at the first traffic lights on the outskirts of Carrigaline. Then take the first exit, left, at the roundabout onto the R612. On the left after 1km, is a car park through which one can access a wonderful cycle path on a dedicated track right out to Crosshaven, with the wonderfully named Drake’s Pool a delightful distraction. Francis Drake is reputed to have sought refuge here from the Spanish Armada in 1589. The track follows the former Passage West-to-Crosshaven railway, which closed in 1932. Cronin’s Pub is great for refreshments.

The outward cycle track along by Drake’s Pool is too lovely not to take on the way back. Retrace the inward path back to the traffic lights in Carrigaline and go left followed by a right at the next crossroads. Then go left at the next roundabout onto West Avenue. This is a quiet country road that brings you to the suburb of Douglas after 7km – with some toughish climbs. Follow the signs for the city centre along the Douglas Road and turn right on Blackrock Road. Pass the hospital and take a sharp left after 1km onto Victoria Road.

This is an edited extract from Cycling Munster – Great Road Routes, by Dan MacCarthy, published by The Collins Press, price €14.99/£12.99. It is available in bookshops and from collinspress.ie