The 13 scariest Halloween events for adults

Trick or treating may be for the kids, but there are plenty of spooky events for grown-ups 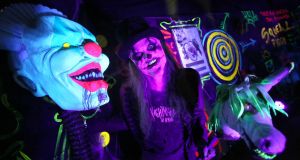 The Nightmare Realm’s extreme walk-through horror event, Haunt Dublin, at the RDS, is not for the faint-hearted. Photograph: Miki Barlok

The only way to watch a movie at Halloween is through your fingers. Scare yourself silly at an outdoor screening of Spielberg’s horror classic Poltergeist in the spooky environs of 400-year-old Loughcrew Church and Graveyard, Co Meath. Thanks to the pupils at Deerpark CBS in Cork we’re all on the lookout out for things moving in mysterious ways, so bring your own seats, rugs and refreshments, and just pray they stay put. The screening takes place Saturday, October 28th and if the weather is bad, there’s an indoor alternative. Here’s hoping it’s a crypt. Tickets: €14, loughcrew.com.

Take shelter in the car at ScreamFest, a drive-in movie event showing classic horror flicks at Navan Racecourse. It costs €25 for a car of up to five people, as long as no one’s scared to play gooseberry. From October 29th-31st with shows at 7pm and 10pm nightly, screamfest.ie.

There’s murder on the menu at the Station House Hotel in Kilmessan, Co Meath. Dine out on its Murder Mystery dinner party night, with prizes for the best costume including an overnight stay. The event takes place October 29th, tickets €55, but only if you have the stomach for it. stationhousehotel.ie.

If Stephen King were to organise the Ploughing Championships, they’d look at lot like Farmaphobia. Based at Causey Farm in Meath, it will scare you witless. There’s a whole new cast of creepy characters this year with new attractions such as the House of Doll. As if dolls weren’t creepy enough on their own, the organisers have rounded up the worst of them and stuck them – and you, if you dare – in a morbid maze.

Further treats include the Vamporium, the Mutation Morgue and the Field of Screams which is set in a 10ft-high cornfield, of course. Runs October 13th-31st, from 6pm. Tickets are priced from €17-€32, farmaphobia.ie.

Also back in action this year – suitably its 13th – is the Haunted Spooktacular Horror Farm at Grove Gardens near Kells, Co Meath. For over-16s only, it has both indoor and outdoor attractions – or rather, repulsions, with names such as Disturbia, Dungeon and Zombie Apocalypse, all offering a devilish mix of live action, special effects and claustrophobia. You have been warned. Runs from October 20th-21st and 27th-31st. Tickets from €25, hauntedspooktacular.com.

Have a fright night at Wicklow’s Historic Gaol with a Paranormal Investigation from ParaResearchers Ireland. Expert ghostbusters will be looking to discover evidence of the spirits thought to wander its cells and corridors. On Saturday October 28th from 9pm to 2am, tickets €55.

Or if you prefer your horrors to be historical, take a spooky adult night tour on Friday, October 27th, to hear all about the torture, starvation and death that characterises the former prison’s past. From 7.30pm, tickets €15, wicklowshistoricgaol.com.

Check into Huntington Castle, the suitably atmospheric 17th-century castle in deepest Carlow. As well as being a swish place to stay, it has a fast-growing fan base as a Halloween tour attraction, given added frisson by its reputation as one of Ireland’s most haunted castles. Not to be confused with its daytime Halloween visitor events for kids, the night tours are best left to teenagers and older – or it will be no sleeps till Christmas. October 27th-31st, from 6.30pm to 9pm, tickets €11.95, huntingtoncastle.com.

Haunt Dublin, The Nightmare Realm’s extreme walk-through horror event at the RDS, is designed to prey on your deepest fears – don’t ask, they just know. Calling it a walk-through is probably misleading given that you’ll either be rooted in fear or bolt through like a bat out of hell.

Either way, you’ll need to keep your wits about you because there’s scary stuff in every shadow. The same company runs an equally – but differently themed – extreme Halloween event in Cork, so if you’ve got the guts, go for a double whammy especially as both venues are doubling in size this year.

And if you’re only half brave enough, you can get a wristband to ward off the ghouls – it makes the actors melt into a fizzing pool of goo. Well it doesn’t but it does get them to back off if it’s all too much for you. Open throughout October, tickets €16-€24, thenightmarerealm.ie.

To exercise or exorcise? Always a conundrum. Marry both urges with a trip up to the notorious Hellfire Club with Hidden Dublin Walks. Departing at 7pm every night during Halloween week from Merchants Quay, you’ll get some dark history deep in the Dublin Mountains.

It’s a desolate spot, the burnt out shell of this allegedly haunted spot. Dating from 1725, it is now traditionally associated by Dubs with Satanism, the occult and all things ghastly. Just keep an eye on your fellow walkers’ feet. Tickets €25, hiddendublinwalks.com.

There’s also a free Halloween parade by Macnas which goes through the northside of Dublin’s city centre, and “Gravediggers & Resurrectionists”, a spell-binding tour of Glasnevin Cemetery, tickets €10.

Other ghoulish adventures include Dead Air (Friday, October 27th and Saturday 28th, in Belvedere House, 6 Great Denmark Street, Dublin, at 8pm, tickets €12); and the Bram Audio Ghost Experience , which is a haunting, audio horror walking tour that brings you through Dublin’s streets on a “petrifying audio adventure”. On from Friday 27th-Monday 30th, €5 to download, bramstokerfestival.com.

Of course Stoker isn’t our only famous scary story merchant – check out the candlelight Halloween Ghostly Night Performance at the Lafcadio Hearn Japanese Gardens in Tramore, Co Waterford. It comprises readings and performances of some of the haunted tales from Lafcadio Hearn’s extensive collection of Japanese legends and ghost stories. On October 28th and 29th, tickets €2-€5. lafcadiohearngardens.com.

It’s time to do the time warp again, again. Catch the magnificent Rocky Horror Picture Show at the Sugar Club in Dublin. With prizes for the best dressed, props galore, hot chocolate and cake for those in the queue, it’s the perfect way to get into the spirit of the season. Saturday, October 28th, tickets €20, thesugarclub.com.

There are more frightful films on offer over at the Irish Film Institute, whose annual Horrorthon is a much more sensible bank holiday option for most of us than the Dublin Marathon: that’s actually a real horror show, they bleed from their nipples, people. In any case, from October 26th-30th you can indulge in a Technicolor gore-fest with more than 30 movie titles on offer, almost all receiving their Irish premiere, including Tragedy Girls, The Endless and Habit. It’s uncomfortable viewing in a comfy seat, ifi.ie.