Walk for the weekend: Great hollow of Western Coom an awesome sight

Ascent and descent at Partry Mountains are steep, but circuit in between on level ground 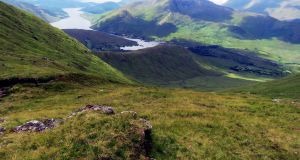 The view from the west-facing ridge of the Western Coom in the Partry Mountains.

The Partry Mountains are the least visited of the famous mountain ranges that encircle Killary Harbour, Ireland’s only fjord, and it is only recently that I got around to seeing what these lonely mountains had in store for me.

Unlike the serrated peaks of the surrounding mountains, Partry is a plateau, the sides of which have been chomped out by ice erosion. The great hollow of the Western Coom is an awesome sight, being over 3km wide and 500m deep. It is topped by cliffs from which steep green slopes streaked with the silver of tumbling streams sweep down to the valley floor.

While the ascent and descent at either end are steep, the circuit in between is on reasonably level ground with a plethora of peaks all around the 600m mark – with very little drop between them.

A red gate at the top of the car park leads on to the mountain, and I began my ascent between a fence and the Glencally River. The melting ice has left great deposits of rock debris into which the waterways of the Glen have cut spectacular channels, making them look like miniature versions of large rivers, with gorges, waterfalls, plunge pools and great deposits of rock where the finer material has been washed away.

I followed The Glencally uphill and turned left into the Glenfree Valley, and when I came to the first deep tributary gully I climbed up alongside it to the summit of Luga Kippen (554m). It was a bit of a slog, but underfoot the going was easy on short grass and rock. The summit is a wide wasteland of rock ridges, giving fine views of the meandering Erriff River, Tawnyard Lough and the Sheeffry Hills.

I made my way over the boggy ground to Maumtrasna and on around to the back of the coom. On my left, there was the splendid panorama of the formidable Maamturks Massif, while Spot Height 518m provided a view which encompassed the full dimensions of the coom.

From here there is a slog up to the Devil’s Mother (645m), the name of which in Irish is “Magairlí an Deamhain” which translates as “The Demon’s Testicles”. This mis-translation may have been to spare Victorian blushes. Anyhow, I notice in the latest edition of the Ordnance Survey Atlas that only the original Irish name is used.

It is an easy walk northwards to Spot height 601m, and rather than continue down the spur which had a lot of sloping rock on it, I cut down the steep grassy slope to the floor of the glen.

Note that the floor of the valley has an extensive area of deep wet bog, so circle around its edge. There had been a prolonged dry spell so I was able to return by my outward route as the river levels were low. They would be impossible to cross if in full flow, so in that case contour along the west side of the Glencally River until you reach the road.

How to get there: Leenane is at the junction of the R336 Maam Cross Road and the N59 Clifden to Westport Road