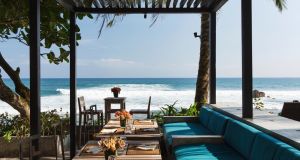 Restaurant at the Owl and The Pussycat Hotel, Galle, Sri Lanka

Armed with honey, and plenty of money (wrapped up in a five-pound note), the owl and the pussycat of Edward Lear’s famous nonsense poem went to sea in a beautiful pea-green boat.

I went to Sri Lanka by plane and without the honey – but my destination was Owl and The Pussycat Hotel. The Victorian poet visited Sri Lanka once upon a time, but apparently hadn’t liked it that much. I’m guessing he didn’t go to Galle, at the southern tip of this tear-drop-shaped island country. For me it was heaven on Earth.

Beautiful Sri Lanka has had a hard time over the years. Portuguese and Dutch explorers came, exploited and colonised, although they layered the legacy of buildings, such as Galle Fort, now a Unesco World Heritage Site, alongside the country’s famous ancient Buddhist temples and palaces.

They were followed by the British, who left behind them the tea plantations and a messy cultural cocktail that resulted in 30 years of ethnic war between the Sinhalese government and the Tamil Tigers, which was bloodily concluded in May 2009.

The south of the country is far less scarred by the violence than the north, but in 2004, adding to the heartache of the conflict, the tsunami of December 26th ravaged the eastern coast, killing more than 35,000 people.

“It could have been far worse,” says Shane Thantirimudalige, the Owl and the Pussycat’s co-owner, in what proves to be typical Sri Lankan positivity. “It was a holiday, and a Poya day, so a lot of people were home with their families.”

What is a Poya day, I wonder? It turns out that Sri Lankans have a respectful attitude to the disruptive powers of the full moon. Once a month (twice in a blue moon) there’s a public holiday, during which meat cannot be eaten and alcohol cannot be served.

We consider this as we sip arrack sours, delicious drinks made with the local coconut-based distillation, pepped up with lots of lime. Thantirimudalige tells stories of Sri Lanka’s past: of temples, including one to house the Buddha’s tooth; and of medicine. Sri Lanka was the first country in the world to establish a hospital, back in the 4th century. Mythical figures mingle with history, and I’m reminded of Ireland and how our lore and legendary heroes weave into our sense of ourselves.

Alongside the pleasures of arrack, Sri Lanka is famous for its moonstones, precious gems, cinnamon, spices and tea. After some sunrise yoga on a platform looking out over the crashing waves (because there’s nothing like pretending to be healthy when you’ve been up too late the night before), we head off to the Handunugoda Tea Plantation, where we wander along paths made fragrant with abundant tropical flowers.

To the sound of peacocks calling, we listen to owner Malinga Herman Gunaratne tell of how his grandfather gambled away vast acres, and how the plantation was saved with the rediscovery of Virgin White Tea.

According to Gunaratne, the best tea is so subtle that even the sweat of the tea pickers can alter its flavour. A 5,000-year-old tradition saw young tea buds harvested by virgins clutching golden scissors, dropping them straight into golden bowls; the first human touch, Gunaratne says, would have been that of the Emperor’s lips. Now, the plantation has revived the making of tea entirely untouched by human hand (and the question of staff virginity is irrelevant).

Later, we stop on the roadside for coconuts, hacked open with a machete in front of our eyes, and we gratefully sip the cool liquid inside. It’s hot here, and while sudden rain showers are heavy, they never last long, and are quickly dried by the returning sun. We stop at a sea turtle hatchery, where eggs are rescued from the sands, and the charm of baby turtles swimming about prior to being released into the sea is only outweighed by the almost human expressions of older, injured turtles, kept safe at the sanctuary.

Hoardings along the roadsides might lead you to believe that Sri Lanka is a nation obsessed with cream crackers. There are adverts for them everywhere, their charms spelled out in Sinhalese. It’s a script which looks like a necklace, so I’m unsure what they’re suggesting and, while I’m as fond of a cream cracker as the next person, they’re not the most memorable thing about Sri Lankan food, which is, in a word: wonderful.

We go to the fish, vegetable and spice markets of Galle in the expert company of Anthony, our hotel chef. He trained with Gordon Ramsay, but doesn’t seem scarred by the experience, and his enthusiasm for food is, you could say, delicious. The fish is boat-fresh, and the spices are heady. We discover how to fry spices, infusing a coconut and lemongrass sauce for crab and parafish (a succulent local white fish).

We travel by tuk-tuk to a sandy beach nearby for a swim. The shoreline that fronts on to the hotel is rockier, and more suited to the stilt fishermen, who still sit atop the long poles to catch fish too canny for nets. At the beach, a line of rocks further out to sea shelters the shore from the biggest waves, creating a small lagoon. Stay in your depth, as strong currents are a feature of this coast, and you’ll be safe for a heavenly swim.

Tuk-tuks themselves are a bit of a thrill. Mine has a spray-job that includes the legend “I’m surrounded by idiots” on the front mudguard, and scenes from Titanic on the side. This becomes slightly less amusing when someone smacks into the back of us, and then someone else goes into the back of them.

A gaggle of dismayed Sri Lankans surround us until a policeman arrives and calmly sorts everything out. No harm done, not even to the Titanic paint job. Back at the hotel the bar man makes me a restorative martini, complete with pepper and curry leaves. It’s astonishingly medicinal.

It’s another late evening under the stars. How can you tear yourself away from those waves, and the chat that carries on into the warm night? Bed beckons however, and I’m looking forward to breakfast already. It’s a starter of kola kenda, a blend of herbs and leaves over rice, followed by either hoppers – small pancakey baskets in which nestle fried eggs – or pol roti, flat coconut bread with spicy scrambled eggs. Sit gazing out to sea long enough and you might manage all three.

But there’s never enough time for everything. We manage to catch the sunset at Unawatuna Beach, heading through winding lanes, fronted with intriguing shops and cafés, to the curving bay lined with bars and restaurants. I’ll have to come back for the whale watching, the moonstone mines, the rainforests and the elephants. On our last night, there’s a cultural show. Sri Lankan dancing is exciting and skilled, with costumes drawing on ancient legends. One of the ultra-talented dancers clearly feels he’s cut out for different things and his expression as he swallows fire is hilarious. It’s pained, just not in the way yours or mine would be on the occasion of fire-swallowing.

Under the British, Sri Lanka was called Ceylon. Before that, it had the Persian name, Serendib, from which our own English word, serendipity, derives. In the ancient tale, three Persian princes from Serendib found happy accidents leading to good conclusions. It feels like an incredibly apt way of describing this beautiful country. Pure serendipity indeed.

HOW TO Sri Lanka

Getting there: Return flights with SriLankan Airlines direct from London Heathrow to Colombo cost from £464 (about €520). Travel with Etihad and SriLankan out of Dublin, with a layover in Abu Dhabi, from about €742 return.

Transfer time from Colombo Airport to Galle is approximately 2.5 hours. Owl and the Pussycat hotel can arrange transport for US$120 (about €100).

Brave the train for a very crowded but beautiful journey for just LKR180 (about €1 – seriously!). Take a taxi from the airport to Maradana Station for your best chance of a seat.

You need a visa to enter Sri Lanka. Apply online at least two days ahead of travel. Fee: US$35 (about €29.50) at eta.gov.lk/slvisa