Walk for the Weekend: Pure majesty on the Pirate Queen’s island

Clare Island, home of Granuaile, is a joy for tourists and purists 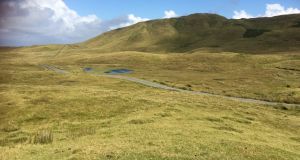 There is something about islands: the sense of otherworldliness, the solitude, the rugged individuality of the people, the way small landmasses fire big imaginings. Such intangibles have drawn me back time and again to Ireland’s western islands, and, this morning, at Roonagh Pier, I feel a lighthearted sense of excitement. I am boarding a ferry to where nature rules and humans only endure within tightly bonded communities.

Disembarking on Clare Island, our group divides neatly into tourists and purists. Casually dressed and seeming intent on pottering about in the sunshine, the tourists are immediately drawn to explore the nearby castle redoubt of the renowned pirate Grace O’Malley. They will then, I guess, retreat to sample lunch in one of the excellent eateries before enjoying a postprandial ramble on the island’s only beach.

Dressed for all weathers the purists are, by contrast, giddily impatient to be off. After all, the ruggedly austere island – offering an abundance of riches for even the most discerning outdoor enthusiast – needs to be explored before the evening ferry returns to the mainland.

Categorising myself among the latter, I head west along the scenic road to Toormore and pause beneath the highest mountain on a fully detached Irish island. The mist-shrouded bulk of Knockmore towers above, but instead of making a direct assault, I head for the island’s west coast about halfway between the mountain and a ruined Napoleonic signal tower.

To the left is ruggedly attractive Inishturk, which vies with Tory for the title of Ireland’s most isolated island. Beyond are Inishbofin and tiny, uninhabited Inishshark, which before the Famine supported – almost unbelievably – 200 people.

Turning my back to the islands, I head uphill with great sea cliffs tumbling to my left. Then, suddenly, they are gone, for as I approach the expansive summit, a great curtain of opaque swirling mist descends. The mountaintop is denoted by a huge cairn and, beyond, a trig point, but the fog ensures there is little else to be seen. Deprived of the renowned 360-degree summit vista, I descend by the great northern cliffs that here reach a vertigo-inducing 400m.

Suddenly, I break through the clag and am rewarded with a golden burst of sunshine and a vista over an opalescent ocean to the mountains of Achill beyond. Then there is the lonesome expanse of the Nephin range, which holds Ireland’s last great pristine wilderness, while to the east is a series of drowned drumlins, the summits of which now form the 364 other islands of Clew Bay.

Where the slope finally eases, I join a zig-zag path meandering southeast to gain a public road at a high point beside two picturesque loughs. Here, cyclists completing the almost obligatory lighthouse circuit pass by chattily as they freewheel insouciantly downhill. Following them takes me past Clare Island Abbey, which is reputedly the last resting-place of Grace O’Malley, and then back left to the harbour.

There is no nourishment in scenery, of course; an island must earn its crust, and so around the harbour local people have created the infrastructure to welcome tourists. Over exquisite chowder in the well-appointed community centre bar, I conclude Clare island’s strength lies with offering an almost perfect mix of unspoiled and up-to-date.

9 Farm fears: is it safe for kids to pet animals on open farms?