No passport machines at Dublin Airport until late autumn 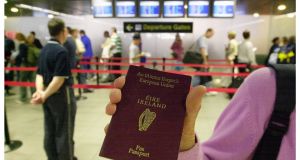 Huge delays at passport controls around Europe are being exacerbated at Dublin Airport on the busiest weekend of the year by the lack of automated passport-reading machines. More than 400,000 passengers are expected to travel through the airport between Friday and Sunday.

Four automated border control gates – which allow people entering the country to use the electronic passport machines – were installed in Terminal 1 on a pilot basis in 2013. However, they were removed from service in April.

A Department of Justice spokesman said new automated passport control gates are expected to be in place by late autumn.

The pilot machines only operated from 9am to 5pm Monday to Friday and could not be directly accessed without passing through the main passport arrival area. The project was intended to test their capability to improve the border crossing processes in aspects such as speed, security, automation and false rejection.

A procurement exercise has been recently completed by the Department of Justice for the development and purchase of a permanent electronic passport facility at Dublin Airport initially.

Contract negotiations with the successful tenderer are expected to be concluded shortly and planning works are under way.