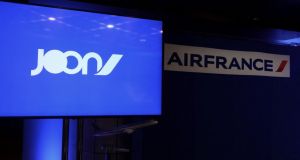 Air France has announced the launch of Joon, a new carrier due to begin services from the autumn. Photograph: Eric Piermont/AFP/Getty Images

Passengers using major European airports are facing immigration delays of up to four hours due to new rules. The association Airlines for Europe said thousands of flights have already been delayed because of understaffing at border controls. The implementation of new rules at border controls means passports are being scanned, resulting in the delays. French and Spanish airports have been hardest hit. Security staff at Barcelona has been on a slowdown and will take further action from today.

While waiting at Dublin Airport during August and September you can enjoy the Spirit of Gin festival in the Loop. There will be more than 50 different gins to taste, including many Irish brands. Sales of gin in Ireland increased by 23 per cent to €83 million last year. According to research organisation Euromonitor International, Ireland now ranks in the top 10 gin-drinking states in the world. There will be a team of 11 in-store “gin ambassadors” to help customers choose the perfect gin and advise on mixes, blends and cocktails. You can always collect your purchases on your return.

Air France has announced the launch of Joon, a new carrier due to begin services from the autumn. The airline will operate medium-haul routes across Europe from Charles de Gaulle airport, followed by long-haul flights in summer 2018. Air France says the airline is “especially aimed at a young working clientele, the millennials (18- to 35-year-olds), whose lifestyles revolve around digital technology”. Air France says Joon is a lifestyle brand but also a “state of mind”. Its visual identity is based on an electric-blue colour code symbolising the airline’s dynamic attitude, as well as the sky, space and travel. The uniform of Joon’s flight attendants will be inspired by the new fashion codes, basic and chic.

Lufthansa’s half-year results are the best in the company’s history, with revenue of €17 billion and earnings before interest and taxes doubled to €1.042 billion. International Airlines Group, parent of British Airways, Iberia, Vueling and Aer Lingus, is reporting revenue for the first six months of €10.888 billion and profit of €975 million. Aer Lingus made a profit of €59 million. The cost of the operational disruption in May due to a power failure was €65 million for additional compensation fees and baggage claims.