European wildfires: What to do if you’re going on holiday in the coming days

More than 10,000 people evacuated due to wild fires ravaging the French Riveria, while parts of Portugal, Spain and Corsica also hit 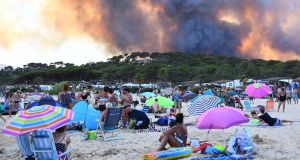 People sunbathing on a beach watch smoke from a forest fire billowing into the sky in Bormes-les-Mimosas, southeastern France, on July 26th, 2017.Photograph: Anne-Christine Poujoulat/AFP/Getty Images

Thousands of tourists have been caught up in wild fires in France which broke out this week along the French Riveria. The wildfires in south-eastern France have forced the evacuation of 10,000 people overnight, according to officials.

Hundreds of fire-fighters have been deployed to battle the fires near Bormes-les-Mimosas, in the country’s Provence-Alpes-Côte d’Azur region.

Some 4,000 hectares of land have been destroyed along the Mediterranean coast, in the mountainous interior and on the island of Corsica, with thousands of fire fighters being forced to flee hotels and campsites in the region.

The advice being given to Irish tourists who are set to travel to the French coast in the coming days is to continue to follow instructions from their tour operators. The Department of Foreign Affairs has advised that Irish holidaymakers due to travel should monitor the situation and check with airlines and local hotels in the affected areas.

The blaze, which has cause thousands of tourists to evacuate, was the latest of several wind-whipped fires that are currently ravaging forest and scrubland on the hills and slopes that spill into the Mediterranean sea between Marseilles and Nice in the south-eastern corner of France.

Authorities believe Tuesday night’s fire, which started in a caravan storage depot, was the work of arsonists. Other fires have been blamed on discarded cigarettes. Holidaymakers fled to beaches near Bormes-les-Mimosas on the Mediterranean coast as a huge blaze swept through the area while other tourists at the Camp du Domaine campsite in Bormes-les-Mimosas told of having to flee at 2am as fire approached.

What happens if you have been caught up in the wildfires?
The advice given to tourists is to check your travel insurance policy. Insurance Ireland’s advice on the Department of Foreign Affairs website is that depending on your policy, tourists should be covered by all medical care abroad, including evacuation by air ambulance, or other emergency procedures, and any other costs associated with an unexpected longer stay.

Can I still travel to France from Ireland?
Yes, all flights are operating as normal. Customers are advised to check with their accommodation providers to ensure that the area has not been closed due to the fires. It’s understood a large number of English and Irish tourists are among the 10,000 people who have been evacuated. There has been no reports of serious injuries.

Hundreds of firefighters fought the blaze with planes and helicopters dropping tonnes of water on the tinder box hills where fires regularly break out in summer time, often as a result of a carelessly discarded cigarette butt.

So far there have been no deaths reported in the summertime wildfires in France, unlike in other countries such as Portugal where they have killed dozens.

If you are concerned about anyone caught up in the wild fires, contact the Department of Foreign Affairs on 01-4082527.