Great Escapes: Up to €580 off a Tuscan villa

We find this week’s bargains on breaks in Mexico, New York, Italy and beyond 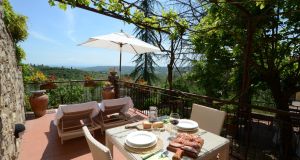 CasaVecchia at Montebuoni, near Siena, is reduced to €567 for a week.

Beautiful Tuscan villas reduced by up to €580

Find end-of-season discounts from €200 to €580 on Tuscan villas for August and September. Browse a selection of beautifully restored villas with pools in totuscany.ie. CasaVecchia at Montebuoni near Siena is reduced to €567 for a week. The two-bedroom house has a beautiful outdoor terrace and views over vineyards and olive groves to Monte Amiata. La Terraza at Montefienali is reduced to €791 per week,totuscany.ie.

On the coast of the Yucatan Peninsula, with its sugar soft beaches, the 5-star Secrets the Vine Cancun Hotel is an escape from reality. A week in September all-inclusive will cost from €1,765pps including flights. Steintravel.ie, (01) 5175990.

Extra holidays for autumn in Italy

Italy is selling so well this year that Topflight has arranged extra capacity and flights for holidays from Dublin and Belfast up to mid-October. Belfast and Dublin will have extra flights to Verona and additional hotels on Lake Garda. Catania in Sicily, Naples, and Bari in Puglia will have extra capacity for seven-night holidays. Stay in the Hotel Bristol in Sorrento half board from €999pps, Bella Italia resort, Lake Garda from €399 (four sharing) and Sicily five-star hotel from €799pps. From Belfast Desenzano de Garda, Hotel Villa Maria is from £679ppps. Escorted tours in October of Venice, Lake Garda, Verona and Cortina reduced to €879pps topflight.ie, (01) 240 1700, Belfast 02897521168.

Explore the autumn bounty in Westport at the Foodie Festival October 20th -22nd. Forage for your food and visit a local microbrewery. It includes two nights B&B with dinner one evening, cookery demonstrations, entertainment and use of the leisure facilities from €189pps, €239 single, hotelwestport.ie.

Pack your boots to explore the Austrian Alps

Discover the beauty of the mountains in autumn with a trip to Mayrhofen in the Austrian Tyrol. Usually a popular ski destination, Mayrhofen is a lovely resort where you can enjoy the outdoors and explore the Zillertal Nature Park. A week staying in a guest house on B&B basis will cost from €383pps with Crystalsummer.ie, (01) 4331010.

Using the new Norwegian service to Newburgh Stewart International airport ClickandGo is offering a four-star break in New York, staying for three nights in the Wyndham New Yorker Hotel at 8th Avenue and 34th Street, from €599 per person. Express bus from the airport is $20 each way and can be booked on stewartairportexpress.com and takes under two hours, clickandgo.com, (01) 539 7777.

The over-55s travel company Golden Ireland has just launched a new solo-friendly holiday, with no single supplement. The first of Golden Ireland’s solo breaks is to Killarney, Co Kerry from the October 15th to 18th. It includes three nights B&B and three dinners in the four-star Lake Hotel, on the shores of Lough Léin, the largest of Killarney’s three lakes. The package also includes a tour of The Ring of Kerry, a cruise on the lakes of Killarney, nightly entertainment, and pick up and collection from the bus or train station, €350, info@goldenireland.ie.