Walk for the weekend: The Waterford Greenway isn’t just for cyclists

The newly reopened final 19km segment of the Waterford Greenway, from Kilmacthomas to Waterford city, is a joy to traverse on foot 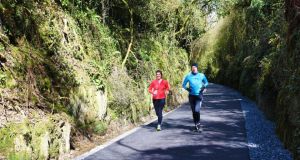 The 46km Waterford Greenway follows an old railway line between Waterford and Dungarvan, and its billing as ‘the most amazing amenity for Co Waterford ever’ is not without foundation 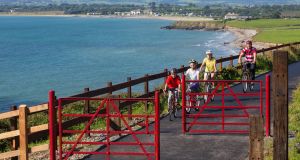 The 46km Waterford Greenway follows an old railway line between Waterford and Dungarvan, and its billing as ‘the most amazing amenity for Co Waterford ever’ is not without foundation

It is a truth almost universally accepted that Waterford punches below its weight as a tourism destination. Has this problem been overcome? The signs are certainly promising as I enter the village of Kilmacthomas on an exquisite summer day. Once almost on life support, today Kilmac is a hive of activity and the reason for this bustle is the Deise Greenway, which tags the disused but once famously scenic Waterford-Dungarvan railway. The first section, from Kilmacthomas to Dungarvan, was reopened in 2016 and this year the final segment to Waterford was completed.

My mission is to test its claim to be “the most amazing amenity for Co Waterford ever”. So, I ascend from the village to join the Greenway via a graciously curved viaduct, which was constructed in the 19th century to surmount the Mahon River. As if bidden by an unseen presence, everyone has stopped above the great, sweeping arches to banquet on the bird’s-eye view over Kilmac’s pretty little streets. Here, it is hard to remain unimpressed by the skill and determination of 19th-century railway engineers. Allowing no natural obstacle to impede profound social change, they were instrumental in transforming our world forever: putting inexpensive travel within reach of ordinary people.

Accompanied by joggers, cyclists, ramblers, photographers and families with tiny tots in bike trailers, I cross a specially constructed overpass that conveys me safely over the scarily hectic N25. Beyond is the austerely attractive Famine workhouse, which acts as the service centre for the Greenway. Hordes of colourfully clad walkers and cyclists are milling around while the coffee shop overflows with customers.

I continue east along the Greenway through rolling Waterford countryside while imbibing expansive views of the brawny Comeragh Mountains. I cross the N25 again, this time via an unobtrusive little tunnel beneath the highway.

Putting one leisurely foot in front of the other, I now let the dreamy landscape unfold languidly, while enveloped by the smells and sounds of summer. Arriving at Kilmeadan, I find it is the busy terminus for the Waterford and Suir Valley Heritage Railway. Here, I reward myself with a coffee in an atmospheric old railway car while amused by the arrival of a train laden with excited children and hovering parents.

Next, I tag the railway tracks beneath a couple of attractive Victorian railway bridges to reach the broad, tranquil expanse of the river Suir. A ramble by the water’s edge decants me to a sign for Mount Congreve, which is one of the world’s most renowned and diverse gardens. Able, like Oscar Wilde, to resist anything except temptation, I ramble the 200m off-route to the garden’s entrance, where, with reckless disregard for my heart rate, I down another coffee while basking in sunshine.

A line of people are queuing for admittance and I realise there isn’t enough time to do justice to this wonder, so reluctantly I return to the Greenway, making a mental note to return here asap. Soon after, my journey ends at the Waterford Institute of Technology West Campus where I draw my conclusion: the Deise Greenway offers a compelling experience to surpass even the renowned Western Greenway of Co Mayo.

Getting there: Kilmacthomas is located just off the N25 Waterford/Dungarvan Road.

Time: 4 hours or just over 1 hour for those hiring a bike.