Mutilations, murder and madness – Dark Dublin is a trip down memory lane with a difference 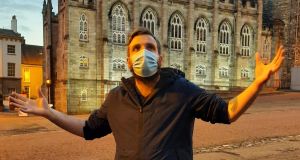 The past was even worse than now. You can still see the wounds that history has inflicted on Dublin, Ciarán Behan tells me on a chilly evening stroll around the city.

Starting in the Devil’s Half Acre – that is, the upper yard of Dublin Castle – Behan describes how the tortures and gruesome executions that took place there gave the place its nickname.

His voice echoes off the surrounding buildings, shaped by the colonial subjugation of the country, he says, as he describes with morbid physicality the practise of pitch-capping suspects during the 1798 rebellion. A hot tar mixture was poured over their heads and left to cool before being ripped off, often taking the victim’s scalp with it. Fatal eventually, if not immediately, in an age before antibiotics.

Dublin Castle was also the scene of the torture of Archbishop Dermot O’Hurley during the reign of Elizabeth I. In an attempt to get O’Hurley to renounce his religion, his tormentors strapped him into knee-high metal boots, which were filled with liquid and placed over a small fire, slowly cooking the flesh off his bones.

“Some of the records say that it happened over one, two or three days,” Behan says. “Despite suffering through that, he refused to give up his religion.” O’Hurley was later hanged.

The story – part contemporaneous account, part later embellishment – was that the owner of the brothel, Darkey Kelly, was having an affair with a sheriff of Dublin called Luttrell and became pregnant. She named him as the father.

The coffins were kind of one-size-fits-all, so rather than build him a new coffin, they just bent him in half

“One of the easier ways of getting rid of a woman at the time was to accuse her of being a witch,” Behan says. “They raided her brothel and found the bodies of five dead men. This leads to rumours that Kelly was Dublin’s first female serial killer.” Whatever the truth of the rumours, Kelly was burnt at the stake.

Walk past a nearby pub now bearing her name and onto Temple Bar’s Essex Street to arrive at the site of Ireland’s first elephant autopsy. It wasn’t planned, not really. Mr Wilkins, a businessman, kept the elephant as a paid attraction until an accident in 1681. “In the middle of the night, the cage that the elephant was in caught on fire,” Behan says. “The elephant was trapped and burnt.”

In an attempt to recoup both his losses and dispose of the body, he invited butchers to cut up the giant corpse, and invited spectators to observe (for a fee). A local doctor who watched the autopsy later published his notes as a book, complete with sketches of the dissection.

The grisly examples on Behan’s tour aren’t all in the distant past; early last year, someone broke into St Michan’s Church on Arran Quay and stole an 800-year-old human skull.

Behan tells me about the skull’s owner, The Crusader, the name given to the unusually tall corpse. “The coffins were kind of one-size-fits-all, so rather than build him a new coffin, they just bent him in half. If that’s not bad enough, they used to actually let you shake hands with the mummy.”

While the crypt was vandalised and other corpses were damaged, the beheading of The Crusader and the whereabouts of its skull dominated headlines. Within weeks, the head was recovered and a man was arrested who later pleaded guilty to trespassing and committing theft.

“The building directly on the other side of the road is a police station,” Behan observes.

He’d cry out for help and the ladies would do the decent thing, hearing someone in distress

Outside the station, staring at you from a utility box, a permed man wrapped in shrouds holds a bowl of roses in one hand while his other veiny arm reaches toward you. The painting, an impressive stylised portrait under the words Billy in the Bowl, looks like a moody 1980s album cover. It’s not; the graffiti marks the hunting grounds of the Stoneybatter Strangler, an 18th-century serial killer who dragged himself through the streets of Dublin in a wheeled tub.

“He would strangle women,” Behan says, recounting the story. “He’d cry out for help and the ladies would do the decent thing, hearing someone in distress. But when they got closer to the hedges and looked in to see who was calling, he’d sideswipe them and wrap his arms around them and steal whatever he could. This escalated into murder.”

At least, that’s the tale that’s been widespread in Dublin for more than 100 years. David Dickson, professor of modern history at Trinity College, and Anastasia Dukova, a historian and expert in early Irish policing, both say they haven’t encountered sources to back the story.

Behan’s plans to ramp up the number of walking tours in October were scuppered by the latest shadow cast on Dublin’s history: the lockdown caused by Covid-19. He has taken the tour online instead, and is hosting a Halloween special event exploring the origins of the holiday.

To take part, go to alternativedublincity.com