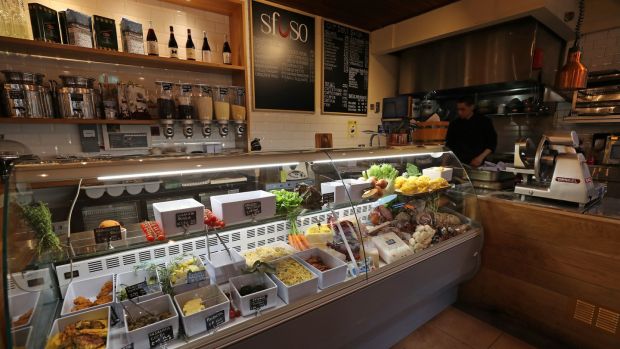 Gastronomia is an Italian concept. Basically, it means delicatessen, but as delicatessen originates from the German, “delikatessen” which, according to the Oxford dictionary, means “a store or part of one that sells cooked meats and cheeses, and special or unusual foods that come from other countries”, clearly it won’t do in an Italian context. Because a gastronomia sells exclusively Italian produce.

So as I sit down at one of the tables in the cosy outside covered terrace of Sfuso, a gastronomia in the premises that used to be Enoteca Delle Lange in the Italian Quarter in Dublin, I find myself a little bit consfuso.

A chalk board on our table lists a few options, the “lazy platter” (€20/€30) which is “a bit of everything from the gastronomia counter”, a tagliere “sfuso” (€15/€20/€25) which is cured meat, cheese, bruschetta “and more”, and then there’s a note that at the counter, they serve a number of dishes by weight, which includes the likes of lasagna, frittata and grilled vegetables.

I had taken a break from reviewing during the declared three weeks of Level 3-and-a-bit-more in Dublin, because I thought all would be back to the old new normal after that. Well, we all know what happened next, so I am now back out, exploring the alfresco options. And I am in the wonderfully convivial company of Manuela Spinelli, perhaps better known as Giovanni Trapattoni’s translator.

She immediately questions our waiter, Francesco, about the name. Why is it called sfuso? It means unpackaged in Italian; this doesn’t sound very nice. Who eats unpackaged food? What is the equivalent in English? “Loose,” I venture, like loose tea. Ah yes, that’s a better word, although neither of us takes it to its logical conclusion, a restaurant called “loose” might be a bit consfuso too.

Our large platter is more generous than lazy, something to do with Manuela’s skills of persuasion I’m guessing

Clearly, Manuela knows the rules. There’s no such thing as a free lunch. We will be talking mostly about food – and a bit of goss too – and as she continues in Italian with Francesco, she gives him instructions on what we’d like to have on our “lazy platter”. We order a carafe of Sangiovese (€16) and then return to dissecting the menu, and the extremely good wine list in detail.

It is what she calls “commercial Italian”. It’s not about regions, it’s “nice, basic, no-brainer, popularised Italian”, with all the stuff that people in Ireland want to eat, which, if done well, is fine. Ooh, I can’t wait!

Our large platter is more generous than lazy, something to do with Manuela’s skills of persuasion I’m guessing. There are the usual Italian cheeses, scamorza and pecorino, and cured meats from a small distributor in Perugia in Umbria – mortadella, salami and coppa. And samples of the sfuso dishes, which you can buy by weight at the counter, priced per 100g, to either eat in or takeaway. The chefs can be seen cooking them.

There’s a chunk of polenta, which Manuela says should be used like bread, to put the cured meats on it. There are roast potatoes, like Manuela’s mother’s, which have been cooked with rosemary, salt and butter; a frittata with onions and asparagus; a light vegetarian lasagne; a very good Parmigiana with a crusty top, clearly made with their own tomato sauce, not some bought in pre-made stuff; and gnocchi alla Romana, which Francesco explains is made with semolina flour, not potatoes. Sliced into discs, about 3cm in diameter, the light gnocchi are topped with a little Italian butter (I know this because I saw the chef using it) and some grated pecorino and finished in the oven.

For dessert, Francesco suggests the tiramisu, which is served in a paper cup, and is a pure delight. Ethereally light, the cake is doused in just the right amount of espresso and alcohol, and a conversation on how exactly it’s made ensues.

Under cross-examination, the chef, Matteo Vismarra, divulges all. The alcohol is Amaretto and the creamy element is made from mascarpone, egg yolks and sugar, with the egg whites folded in, and no, there is no cream, and the eggs are not cooked, not even a tiny zabaglione bit.

So a thoroughly Italian experience, mangiare all’aperto. But will Manuela be back? Sì, sì, of course she will. The chef is from her part of Italy, the food is done nicely and the atmosphere on the terrace is so Italian. And will I? Most definitely. That wine list merits further investigation.

Lunch for two with one dessert and a carafe of wine was €52.

Verdict The Italian dishes that we love, cooked well by Italian chefs