Saving lives at sea: a day with the Baltimore lifeboat 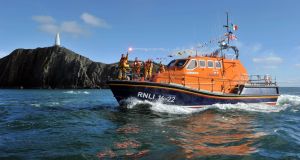 Baltimore lifeboat: the Alan Massey; 40 of the village’s 300 or so permanent residents are RNLI volunteers. Photograph: Michael Mac Sweeney/Provision

Imagine doing a job where you have to arrange cover for every social event you attend. A job that requires you to wear, or keep close to you, a pager at all times. A job that involves antisocial hours, all weather, and personal risk. An unpaid job.

This is what the volunteer crew of every Royal National Lifeboat Institution lifeboat and rescue boat do, all around the coast of Britain and Ireland. They have been at sea in search and rescue for more than 150 years, and command respect in every community they serve. In Ireland, where nowhere is very far from the sea, that means every community.

It’s a misty summer’s day, and some of the crew from the Baltimore station have gathered at their recently expanded and renovated building on the shoreline close to the west Co Cork village. This is one of the busiest lifeboat stations in the country, with 32 call-outs last year. Usually, when reporters need to interview several people at once, it can be tricky to get everyone together. Not on this occasion. For the seven members of a crew who are used to mustering at short notice, at all times of the day and night, a 1pm meeting is the easiest deadline they’ll make this summer.

“I’ve launched the boat in high heels and an evening dress,” Rianne Smith says. She’s a diver, and has been a volunteer for 20 years, one of the “slip crew”, whose job it is to launch the rescue boat.

We’re talking in a room with windows below to the station’s rescue boat, the Alice and Charles, which, when launched, slides like a nautical toboggan down a track towards the sea. Its €3.5 million all-weather lifeboat, the Alan Massey, is moored alongside the building. Later I get a tour of its interior. The wheelhouse is like an aircraft cockpit. Everything on board is computerised and dazzlingly impressive – its twin 1,000hp Caterpillar engines allow the boat to reach 25 knots. But all the technology and horsepower in the world cannot replace the work that RNLI volunteers like these based at Baltimore do at sea. They are the essential human ingredient in any rescue operation.

Just as the sea is unpredictable, so is the timing of the calls for help that come to the 40 or so people attached to the Baltimore RNLI station. They’ve been called out from weddings, parties and dances – hence the evening dress Smith once wore to launch the boat. Baltimore, in common with every other station, has a few paid staff – the mechanic, for example – but most are unpaid. There are 28 seagoing crew and 12 slip crew. Given that the village has a permanent population of only about 300, it means a large percentage of the community are involved with the RNLI.

You have to live within a five-mile radius of the station. You have to have a medical. You can’t be colour blind. You have to do a sea survival course.”

Cathal Cottrell, the station’s full-time mechanic, outlines the requirements of being a volunteer. “You have to live within a five-mile radius of the station. You have to have a medical. You can’t be colour blind. You have to do a sea survival course.”

Cottrell has long links with the Baltimore station. There is a certificate on the wall of the room we are in, from RNLI headquarters. It honours the crew of the then Baltimore lifeboat, the Robert, for going to the aid of boats in the Fastnet race of 1979, when a storm destroyed many boats and killed 15 sailors. One of those crew members was Noel Cottrell, his father, then acting assistant second mechanic.

Whenever Cottrell leaves Baltimore he must first put cover in place, as must the coxswain. He plans his holidays six months in advance. The boat cannot go to sea without a mechanic and a coxswain (the lifeboat’s helmsman and skipper). Cottrell has worked at the station for 29 years. That isn’t the longest service in the group, however: that marker goes to Kieran Cotter, the coxswain, who is 62 and has 42 years of RNLI experience at Baltimore.

It’s not only rural sports teams that have lost members as younger people have moved away. “In 1998 I was the second-oldest crew member, at 33,” Cotter says. This is one reason the RNLI lifted its age limit for crew members; an acknowledgment of invaluable experience is another. The age limit used to be 55; now it is 65.

When the pager goes off in the middle of the night someone has to stay home to mind the kids, and that’s usually the woman

Of the 28 seagoing crew at present, none are women, and only two of the 12 slip crew are women. Why?

“When the pager goes off in the middle of the night someone has to stay home to mind the kids, and that’s usually the woman,” Smith says.

“Make sure you write down it’s a woman who said that,” Cottrell says.

“We have a lot of people who fundraise for us, and it’s probably 50-50 men and women who do that,” Declan Tiernan says.

As soon as their pagers go off the people who are able to give up what could be some hours drive at once to the RNLI station. A crew of seven is required to put the all-weather boat to sea, plus the mechanic and coxswain, and a crew of three for the rescue boat. How do people get chosen to go out to sea?

“It’s usually the first people to arrive,” Cottrell says. “Sometimes you might need someone with first-aid training, or particular experience, and if they’re on the quay they go in the boat.” With most call-outs, 10-12 people arrive within minutes.

Is it an anticlimax to arrive on the pier and see the boat already on its way out to sea? “Not at all,” Ronnie Carthy says. “You’re delighted. It means the boat is on its way out to help whoever needs to be helped. Well, sometimes you’d wish you were on the boat, too, but the main thing is that it has gone out.”

In 2017 it’s the pager that alerts volunteers to the call for help at sea. “Twenty years ago it was a rocket that you fired with half a pound of powder,” Cotter says. It made “two loud bangs in close succession, 30 seconds apart”. If the rocket went off at night the noise woke not only the crew but also other members of the community. “Sometimes people complained about the sound, but the great thing about the rockets was that everyone knew something was happening. Now people don’t know if we’re on a training exercise when we go to sea or are on a call-out,” he says.

The RNLI fundraises throughout the year, for new boats, for maintenance of stations, for crew gear and for all the many other things needed to keep this marine charity going.

“The RNLI is a volunteer organisation that is the envy of the world,” Jerry Smith says.

Funds raised by each station go into the general RNLI account, but the per-capita amount is logged, and stations that raise the most money benefit in terms of new boats and equipment. Baltimore has always raised some of the most money per capita. “We have a lot of very generous people who come here to west Cork on holiday,” Cotter says.

The Baltimore crew, like their colleagues at every other Irish station, are always looking for more volunteers: for sea and shore crew, and for people who will fundraise. As for a water-safety message, Cottrell says, “People need to understand that ‘freak waves’ are not freak. In general every seventh wave is a large one. People going close to the water need to know that, and if you are fishing off rocks please always wear a life jacket, because you could get washed off.”