Exploring the temples of Angkor, where civilisation and nature entwine

Shilpa Ganatra takes a phone photography tour of the magnificent Angkor Wat, and the temples that battled with the elements… and lost 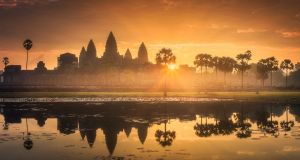 Almost 900 years since its construction, Angkor Wat remains a masterpiece

Almost 900 years since its construction, Angkor Wat remains a masterpiece - so iconic that it adorns the full trinity of national motifs in Cambodia: the flag, the currency, the beer.

The fig and kapok trees whose serpentine roots have strangled the other Angkor temples into ruin are absent here. The blackish biofilm that stains this ancient Cambodian temple from the top down only adds to the atmosphere.

There has been much talk of overtourism here, but on the hot, clammy day of my visit, there’s nothing “over” about it. Perhaps it’s good planning by my guide, but it’s more likely to be the drop in visitor numbers recently. In 2019, the annual total fell to 2.2 million, a 15 per cent decrease on the previous year. NGOs blame political instability, locals say it’s the low quality of the souvenirs sold, the government believes their plan to spread out tourism across the country has been too darn effective (and to be fair, visitor numbers across the kingdom rose 6.6 per cent overall). Most recently, coronavirus has grounded most Chinese tourists, who make up 40 per cent of Cambodia’s visitors.

As a country still recovering from the destructive regime of Pol Pot and the Khmer Rouge, the decline is cause for concern for the country. But the silver lining is that the visitor experience is all the better for it.

I wander around Angkor Wat relatively undisturbed, and though I’ve read plenty about the complex and seen all the pictures, I’m still bowled over by the intricate details that have survived centuries. I run my finger along panels of repeating patterns similar to Islamic art, and I take in the detail of six apsaras (heavenly nymphs) that emboss one wall.

I can still make out their closed eyes, full lips, enormous head gear and jewellery so embellished that I feel sorry for the poor soul whose job it was to carve them out. These are just six of the 3,000 uniquely carved apsaras across the site. It’s fitting grandeur and scale for Emperor Suryavarman II’s temple to the supreme Hindu god Vishnu, with its dual intention as his mausoleum (though he died in battle in 1152).

I’ve opted for a half-day tour instead of the two or three full days that the world’s largest religious site needs. It’s our guide Alessandro’s least favourite temple. We’re on a phone photography tour, so through a photographer’s lens, only a sparsely-populated temple is fit for purpose “unless the people walking through are locals”, he advises. “Try to catch locals or monks in the picture.” Lucky for us, as we take our position for the money shot in front of the lake that perfectly reflects the towers of the temple, we manage to snap tourist-free photos so we can pretend we were the only ones there.

Located 6km from Siem Reap, the 20-odd temples still open to the public are all within easy reach of each other. When built in the first half of the 12th century, the Angkor complex served as the capital city of the Khmer Empire that stretched through southern China, Burma, Laos and Thailand. Over 1 million people lived within Angkor at its height, with the temples – since changed from Hindu to Buddhist – the centrepieces of the biggest city in pre-industrial times. This backstory makes it all the more interesting to visit the temples that have succumbed to the elements, since drought and floods in 15th century caused the capital to shift to Phnom Penh. The abandoned temples exist in stark contrast to the magnificence of Angkor Wat, whose use as a temple has remained constant throughout the centuries.

A few minutes east of Angkor Wat – through a thick forest that once was the residential part of the city, and past a police officer who stops us for a bribe, a sobering reminder that corruption is still rife in Cambodia – Ta Prohm is markedly different. The complex is huge with a network of buildings and sections to clamber through. At the famous centrepiece, where an imposing tree spills over the mossy building, there’s a small queue of people waiting to have their picture taken (I join it – you only live once, right?).

This semi-natural phenomenon is marvellous to see, but it also leaves me shook. Back in the 12th century, the most advanced methods were used to quarry the stone from Mount Kulen, construct the temple, and decorate it to exacting standards. Its magnificence was a symbol of Khmer power and pride. But now it barely stands. I read on an art and archaeology website later that the kapok tree “is supporting the monument and destroying it at the same time. The roots pull apart the temple’s stones, which then become supported mostly by the root system itself. When the tree eventually dies, both it and the building will come crashing down.” With climate change at the forefront of my mind during this trip, this weird symbiosis – so delicate in balance but visually dominated by the tree – serves as an allegory. It reminds us that regardless of our grand ambitions, in the relationship between civilisation and nature, we are only ever at the mercy of our environment.

It’s again seen in Preah Palilay, a smaller site located past a modern Buddhist monastery teeming with worshippers. Alessandro, a former French event planner who took a holiday to Cambodia, met his wife, and has lived here since, explains that today is Buddha day, so it’s unusually busy. On top of a set of stairs, an orange-robed monk blesses soon-to-be married couples by dousing them with ladlefuls of holy water. A newly purchased motorbike gets the same treatment.

It becomes quieter as we approach the temple, and once we arrive it’s ghostly. Fully grown trees protrude from its base like fungus. Statues that guard the temple have lost their heads. Some are found amongst the rubble, along with once-spectacular carvings that are now weather-beaten and succumbing to moss. This site not only speaks of the fight between civilisation and nature, but it also carries the dystopian feel of a lost city.

Over a frosty beer back at the homestead – I’m staying at the Foreign Correspondents’ Club (FCC), once home to journalists covering the wars in Cambodia and Vietnam, now an upmarket heritage hotel – it becomes clear that different visitors to Angkor take different perspectives. Alessandro adores Preah Palilay; visually, the carved faces among the rubble are hidden gems. And there’s plenty to be said about the new type of beauty created when civilisation and nature quite literally entwine.

I continue my trip enjoying the spoils of modern-day Siem Reap: the food is out of this world, the nightlife is wild, and when perusing the markets, I spend more time talking to smart, kind locals than I did shopping (even though trade is dwindling, their sales tactics remain remarkably unaggressive). But rarely is the awesome Angkor complex – both the well-maintained Angkor Wat, and the unmistakable sight of the temple-tree hybrids – far from my mind.

Tickets for the Angkor complex are €34 ($37 US dollars) for one day or €57 ($62) for three. Siem Reap is big on the backpacker trail so there’s lots of bars on Pub Street. Go for a nosey around the Made in Cambodia market and stop off at Haven for a hearty Cambodian-Western meal at a place known for empowering locals. Phare, a big-top circus similar to Cirque du Soleil, is another social enterprise and a fun night out.

FCC Angkor by Avani is located centrally but on a quiet street. Recently renovated, it has 80 colonial-style rooms that are impressive in design and detail, down to the retro typewriter holding a personalised welcome letter. It has an outdoor pool, gym, spa, and an exquisite, well-priced restaurant, but Scribe, the outdoor bar/café, is the social centre. Rooms are keenly priced, from €140 per night.

Fly indirect from Dublin, Cork or Shannon from €699.