Three comfort dishes: A chowder, a cheesy gratin and a chicken salad, all with a whiff of delicious smoke 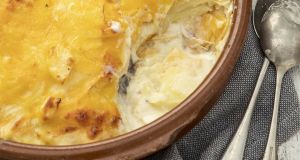 Gratin of smoked mackerel and turnip with spiced pickled cucumber

In our Tannery Cookery School in Dungarvan I talk about the weather a lot. It’s not banter. It’s because weather and the seasons determine what we eat and when we eat it. What you eat also has everything to do with mood. On a cold and rainy day, after walking the dog, when you’re soaking and miserable, nobody wants a tomato salad. What you want is a bowl of chowder. Eating is logical, if we listen to our bodies.

What makes a chowder work is the magical combination of smoke and cream. That hint of familiarity is instantly reassuring. I like simplicity in my chowder, that’s why the base is just leek and potato. This is a combination that might not generate excitement; it is normally the lazy man’s soup. However when it is cooked with care, it is seafood’s best friend.

I don’t use flour as many a nice flavoured chowder has been ruined by having the texture of wallpaper paste.

The first dish I ever learned to make was gratin potatoes. A part-time job in a local restaurant gave me skills that allowed me to help at many a party where my gratin went down a storm.

I don’t know anyone who doesn’t love a gratin dauphinois. What you mightn’t know is that it makes a tremendous feed if you nestle something extra within it – in this case smoked mackerel and a bit of turnip. This recipe is adapted from one by the emperor of food writing Nigel Slater. If you exclude the mackerel, try adding celeriac, sweet potato or parsnip. It’s a tasty revelation.

I’m picky though, when it comes to smoke. I don’t love smoking for the sake of it, it needs to be subtle not overbearing. I wouldn’t eat smoked cheese even if Scarlett Johansson desperately wanted to feed it to me while staring at me lustfully at a post-Oscars party.

But the gentle silky notes of perfectly smoked chicken makes me swoon. Ummera is an amazing example. I pair it with a creamy blue cheese dressing, crunchy leaves, grapes, and toasted almonds for some diversion. It is like a Caesar salad’s more interesting cousin.

Cook these dishes, rub your bellies and think of me.

GRATIN OF SMOKED MACKEREL AND TURNIP WITH SPICED PICKLED CUCUMBER

For the spiced pickled cucumber:

1 Preheat an oven to 180 degrees, or equivalent.

2 Place the milk, cream, crushed garlic, potatoes, turnip, salt and pepper into a large saucepan and slowly bring to the boil over a low heat. Stir a few times to make sure the potatoes are evenly coated with the milk/cream mixture.

3 Simmer for at least 20 minutes until the potatoes are just tender, taking care that the potatoes don’t stick to the bottom of the pan.

4 Stir in the horseradish.

5 Turn half the potato mixture into a shallow oven-proof dish.

6 Scatter the smoked mackerel over the potatoes. Spoon the remaining mixture on top.

7 Sprinkle the grated Cheddar over the potatoes.

8 Bake for about 35-40 minutes, until golden and bubbling.

For the pickled cucumber:

1 Bring the vinegar, water, sugar and ginger to the boil.

4 This will keep for up to a week. I use the pickling liquid as the basis for a salad dressing with a little hint of cream to thicken.

1 Put the leeks into a pot with the butter. Cover and cook on a low heat for five minutes to allow the leeks to steam in their own buttery juices.

2 Add the potatoes and chicken stock and the bay leaf.

3 Bring to the boil and simmer for 15-20 minutes until the potatoes start to break up, then add the fish and cream.

5 When ready to serve, scatter over the chives or dill.

1 Blend the apple juice with the crème fraiche, season and set aside.

2 When ready to serve, turn the lettuce in the dressing, making sure there is a light coating on every leaf.

3 Assemble the salad with the leaves on the base, followed by the chicken, the grapes, the blue cheese and finally the almonds.