Why are there so many young foxes roaming around our cities?

With a population of up to 200,000, Ireland’s only wild dogs live in all parts of the country A fox on the grounds of the Garda office on Harcourt Street, Dublin. Photograph: Dara Mac Dónaill 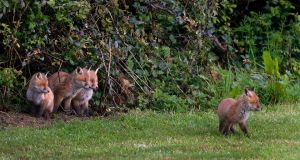 A litter of fox cubs adventuring out of their den in Delgany, Co Wicklow. Photograph: Nick Bradshaw

“Foxes are a bit like Marmite, you either love them or you hate them,” says Dave Wall, citizen science officer at the National Biodiversity Data Centre (NBDC) in Waterford.

Foxes are found in abundance all over Ireland and are in fact the mammal found most widespread across the world.

“We don’t know how many foxes are here because there has never been a census of them done, but there are regular sightings of foxes and they are one of the more commonly recorded mammals on the NBDC maps,” says Wall.

In their book, Exploring Irish Mammals (Townhouse Press), Tom Hayden and Rory Harrington, estimate that there are between 150,000 and 200,000 foxes each year in Ireland before breeding season.

“There is almost no one kilometre square of dry land in the county that is not visited by a fox but they are absent from most offshore islands,” write Hayden and Harrington. Foxes are found on farmland, woodland, coastal areas, uplands and urban areas with up to five families living per square kilometre in some parts of Dublin.

This native species across Europe and Asia is so adept at crossing land and even ice bridges that it may have been one of the first species in Ireland. They were introduced to North America in the 18th century and later to Australia, where they have become a major pest to native marsupials, which didn’t evolve in a world of foxes.

“They are our only wild dog. They have fantastic agility and can clear a 6ft wall and climb trees. They are a beautiful animal no larger than a wild tomcat and are sometimes called a cat-like canine,” says Wall, who studied foxes both as an undergraduate zoology student at Trinity College Dublin and later as a postgraduate researcher at University College Dublin.

Although foxes can live until they are 10, they rarely survive that long and are either killed on the road, hunted or die from disease. While the long since extinct wolves were foxes’ natural predators, they now have a new predator since the reintroduction of golden eagle and white-tailed eagle.

According to Wall, a high percentage of foxes won’t survive beyond their second birthday, and most will only live until they are four or five. Some experts suggest that up to half of cubs won’t reach their first birthday.

The parasitic skin disease mange is their biggest threat. “Mange is a huge killer of foxes. The UK lost up to 95 per cent of their fox population a few years ago but it has recovered since,” says Wall.

In spite of their high mortality rate, foxes are able to regenerate because they have about five cubs each year.

In Ireland the red fox mating season runs from January to the middle of March. During the mating season, foxes become more vocal, with courtship rituals ranging from body postures and scent spraying to fighting with other males.

To signal that she is in heat, a vixen will give out a shrill squeal that sounds unnervingly like a human scream. The litter arrives about 50 days after conception.

They become adults within eight months, at which time the males are pushed out of the den, but the females often stay to help and play with the cubs. The cubs are blind and deaf at birth.

Each breeding pair of foxes has its own territory, and young male foxes can only move in to a territory when the older fox dies – which explains a little why there are so many young foxes roaming around our cities.

Foxes moved into urban areas because of the availability of food sources. In the countryside, they will feed on what’s available – berries, insects, small mammals such as mice, rats, rabbits and even fish in coastal areas.

“Foxes will take hens and wildfowl that aren’t fenced in. Farmers sometimes blame foxes for killing lambs but studies have shown that foxes don’t have a significant impact on death of lambs. They are more likely to feed on dead lambs,” says Wall.

In cities and towns, foxes will eat whatever they can find – thrown away takeaway meals, food left out for cats or birds or even food left out especially for them.

“There are lots of people in urban areas that feed foxes every night. Some people get great pleasure out of it – and sometimes feed foxes better than they feed themselves – and it only becomes a problem if their neighbours detest foxes,” says Wall.

Keen gardeners, however, aren’t very fond of foxes because they dig up lawns and damage flowerbeds when searching for insects.

In her book, Wild Dublin, Éanna Ní Lamhna writes about foxes that live in the Provost’s Garden in Trinity College Dublin. And there are also foxes’ dens in St Stephen’s Green.

“The territory of the average urban fox is as low as 20 hectares, whereas it can be up to 100 hectares in rural areas,” says Ní Lamhna. The smaller territory in urban areas is of course due to the availability of food.

In the countryside, foxes make their dens underground in earthen tunnels, nests under water drains or in rock crevices. In urban areas they will live under buildings, garden sheds or even under decking. They spend most of their day in their dens and hunt by night.

Like dogs, they have excellent hearing but their eyesight works best in low light. Usually solitary nocturnal hunters, they stride, canter or sprint over long distances in search of food using scent-marked pathways.

May and June are the best time to watch foxes when the cubs are playing near their den. An occupied den will have remains of food strewn around. However, if you’re fox-watching, it’s crucial to remain hidden and downwind from the fox family so they can’t smell you. And, of course, that you stay far enough away so the animals are relaxed and don’t feel under threat.

It’s important to remember that foxes are wild animals. Although many of them now live in urban areas, they can’t and shouldn’t be domesticated. So, if you’re feeding a fox cub, leave the food far away from your house – as foxes are inquisitive and could easily run into your house.

To prevent infection, never hand-feed or pet a fox and never touch or go close to fox faeces.

Do you really need to take supplements during pregnancy?
4

British socialite whose father, Lord Mountbatten, and son were killed by the IRA
7

My husband doesn’t find me sexy. Should I end the marriage?
9