What a dump – the landfills that became parks 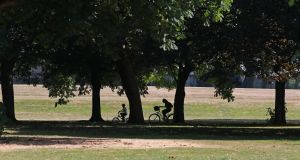 Standing on the highest point of the former Kinsale Road landfill site in Cork, you can see right around the city – to the spires of St Mary’s Cathedral and St Anne’s Church, Shandon Road in the north, to Cork University Hospital in the west, towards Douglas in the east and across the dual carriageway to the nearby Grange Fields in the south.

It’s incredible to think that in a few months this undulating site – which took municipal waste for over 50 years, will reopen as Tramore Valley Park, attracting walkers, runners, leisure cyclists, BMX bikers and various sports clubs using the playing fields.

The plants and signage aren’t yet in place when I visit but facilities manager, Kevin Ryan, speaks enthusiastically about the finishing touches to what has been a 20-year-long, €42 million project.

“It’s a brownfield site with a high population nearby. Turning it into a park is giving something positive back to the community,” says Ryan.

Cork BMX club, running clubs and rugby clubs have already had occasional use of the facilities before the official opening.

A marshland and two small rivers on the site attract ducks, moorhens, oyster catchers and herons and plans include walkways in these areas. Cork city’s largest recycling depot will continue to operate on the site when the park opens to the public.

Turning a former landfill into a park is not a simple process. It requires years of planning and ongoing maintenance work for 30 years after the landfill has closed.

For example, phased restoration works at the Kinsale Road landfill started in 2001. This involved capping sections of the dump with heavy duty plastic covered in one metre of clay and grass.

“Landfill gas in a major issue so we have 180 underground gas extraction wells on site which are linked horizontally and fed into the electricity grid at a sub-station next to the site,” explains Ryan.

Leachate – the polluted liquid than results when rainwater seeps into a dump - also has to be pumped off the site into the city’s sewage treatment system.

“We will continue to monitor both the landfill gas and the leachate for 30 years according to the Environmental Protection Agency’s regulations,” says Ryan.

In an article about the conversion of landfills to parks, the San Francisco-based Trust for Public Land also points to the potential problems of ground settlement.

“Like cereal in a box, municipal landfills settle from five to 20 per cent over a two- to three-decade period. Such settlement may cause foundations to break and sink, utility and irrigation pipes to burst, roads and paths to crack and heave, light poles to tilt and sports fields to crumble,” write Peter Harnik and others.

One of the largest conservation groups in the United States, the Trust for Public Land, works with communities to recycle land for new public purposes and actively promotes the conversion of landfills to parks.

“There are hundreds of old closed local authority landfills, many of which closed when the licensing system came into place in the late 1990s. For example, there used to be 40 landfills in Cork, 38 of which closed with all waste then brought to the two remaining open sites,” he explains.

The EPA licensing scheme requires landfill operators to build funds from gate charges to cover both operating costs and aftercare costs for 30 years after the landfill has closed.

Once the landfill site is capped off with liners and one metre of soil and environmental infrastructure [gas vents from underground gas wells and leachate wells to take leachate samples] isn’t compromised by developments on the site, Moriarty sees no reason why many of these former landfills can’t be put to good use.

“They are an untapped resource for walkways, playing fields, wetlands, cycle tracks and only a few projects have gone ahead so far,” says Moriarty.

He points to completion of sports pitches at the former Doora landfill in County Clare as a recent example. And, there are plans to install a cycle track on Marlinstown landfill in Mullingar, County Westmeath and plans to develop walkways at Finisklin landfill, County Sligo.

Dubliners may remember that Fairview Park on Dublin’s northside is built on a municipal dump which famously took rubble from O’Connell Street after the 1916 Rising and later the Civil War.

In North Dublin, Rogerstown Park is due to open in April, 2019 in the former Balleally landfill near Lusk. Balleally landfill was closed in 2012 and the park- which overlooks Rogerstown estuary – will include woodland walkways, playgrounds, picnic areas, a bird-watching hide and links to the Fingal coastal walkway and cycleway.

And a former municipal dump at Ballyogan in Dún Laoghaire Rathdown is now on its way to becoming Jamestown Park.

However, the journey from dump to destination wasn’t exactly an easy one in that case. A report in Magill magazine from 2007 pointed to concerns about the excavation of 90,000 tonnes of waste at the landfill site. Local residents were particularly worried about the potential health risks of odours from old toxic materials that could be disturbed during the excavation process. The issue of illegal dumping at the facility was also raised.

The capping of the Ballyogan landfill was completed in 2010 and plans for its conversion to a park are now underway. Ruairí Ó Dúlaing, chief of parks at Dún Laoghaire Rathdown local authority, says that the proposed park will be an important amenity for the growing population in the area.

“There are incredible views out over Dublin Bay and back up to the Dublin Mountains. We want to get tree planting started this year and we hope to engage with local communities and schools to do this planting.”

The trend of converting dumps to destinations is a worldwide phenomenon with trailblazing examples in the United States, Australia, China, Singapore and Israel.

For example in Seattle, Washington State, over 40,000 trees, shrubs and vines and a lake filled with koi and turtles now exist on what was a 62-acre Miller St dump.

In Tel Aviv, Israel, Mount Hiriya – a 60-metre high former landfill is part of the Ariel Sharon Park, deemed to be the largest environmental rehabilitation projects in the world. And the Thurrock Thameside Nature Park is an Essex Wildlife Trust nature reserve located on top of the former Mucking Marches Landfill site in the UK.