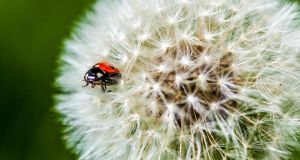 Researchers in the United States showed that dandelions and white clover on lawns supported 37 species of bee.

The interest in planting native flowers, shrubs and trees among gardeners, tidy town groups and managers of public parks has bloomed in the last few years. It’s partly due to the All Ireland Pollinators Plan 2015-2020, a bottom-up initiative to halt the decline in bee species in Ireland.

“More native flowers in our landscape mean more pollinators and other insects. More flowers mean more fruits and seeds and therefore more birds and mammals,” says Fitzpatrick who has been heartened by the public’s support for the plan.

You may have already noticed how many tidy town groups and park managers are now leaving areas of grass to grow wild or cutting it less often so that wild flowers can spread through the grasses.

“Pollinators [bees, butterflies, moths, wasps, etc] need us to move away from seeing the landscape as purely a human space that should be kept neat and tidy. It’s not about letting things go wild but we do need to let nature back in or we risk losing its vital free services,” says Fitzpatrick.

Currently one third of our 98 wild bee species are threatened with extinction, and our common bumblebee species have declined by almost 15 per cent in the last five years. The All Ireland Pollinator Plan website offers clear guidelines to gardeners, farmers and public park managers on what to plant and how to manage the land to attract bees and other insects.

For example, gardeners should make sure their garden has at least one flowering food source from spring right through to winter. Willow trees and dandelion flowers are good in spring, clover flowers in early summer, lavender in late summer, ivy in the autumn and mahonia in the winter.

If you’ve a large garden, you could also leave areas to grow wild so that wild pollinators can nest there.

Farmers are encouraged to maintain good quality flowering hedgerows with hazel, willow, blackthorn and hawthorn in the springtime, bramble in the summertime and ivy in the autumn. Patches of tussocky grass and nettles and wildflower rich buffer strips or field margins also encourage more insects and small mammals.

These stretches should only be cut before April and then again in September so that nests are undisturbed and wildflowers have a chance to go to seed. Pesticides shouldn’t be used in these areas.

“It’s about retaining healthy hedgerows on farms and allowing them to flower, not using herbicides so freely to tidy up our public spaces, planting more native flowering trees, not cutting grass so often so that pollen-rich dandelion and clover can grow and provide food and planting pollen-rich and nectar-rich flowers in our parks and gardens,” says Fitzpatrick.

Sharon Buckley, a Wicklow beekeeper who works in the Howbert & Mays garden centres at Airfield Farm in Dundrum and in Monkstown, Co Dublin, says that people are now more interested in knowing what to plant to attract bees to their gardens.

“Now is a good time to buy native bare root trees such as hazel or willow which are bee friendly. Mountain ash is another good tree to buy for a town garden as it provides flowers for bees in the spring and fruit for the birds in the autumn,” she explains. Rowan, alder and silver birch trees are other trees good for birds.

While snowdrops and crocuses provide the first feed for bees, dandelions are an excellent source of protein and nectar.

“It would be great if people left their first cut of grass until a bit later so that dandelions have a chance to grow,” says Buckley. The Ashford & District Beekeepers Association, which has about 150 members, is also encouraging Wicklow County Council to stop spraying dandelions.

The Pollinator Awards in the Tidy Towns competition and the Green Flags for Parks awards, run by An Taisce Environmental Education Unit have also helped raise awareness of the value of native flowers, hedgerows and trees.

“Councils across this island are changing the way that public land is managed,” says Fitzpatrick. Since 2015, 140 local communities have become more pollinator friendly by entering the special Pollinator Awards in the Tidy Towns competition.

Clonmel Tidy Town Group won the Pollinator Award in 2018, beating 64 other entries from 22 counties. The group was commended for taking a whole town approach where specific areas were pinpointed for pollinating insects. The Tipperary town has community orchards, native flowering hedgerows and pollinator-friendly areas in parks and council land – all kept pesticide free by manual weeding. Local residents associations were given wildflower seeds to plant in their gardens.

“The most important changes we made were to delay mowing for four or five weeks, planting bee-friendly crocuses, snowdrops and bluebells instead of daffodils and tulips, and allocating sections in public parks for wildflower meadows,” explains Martin Beehan from Clonmel Tidy Towns.

The group also planted native apple trees in community orchards and whitethorn, blackthorn and willow to create hedgerows along the River Suir Greenway. And the response from the locals has been very positive.

“We have signs up along the Greenway and at roundabouts saying the areas are managed for wildlife. It has brought an air of positivity to the town,” says Beehan.

How wildflowers can help reverse the decline insect species

2) Researchers in the United States showed that dandelions and white clover on lawns supported 37 species of bee. White clover was important for bumblebees and honeybees whereas solitary bees, honeybees and hoverflies preferred dandelion.

3) An American study found that wildflower strips sown within 3 metres of blueberry crops can, after three to four years, attract almost double the amount of wild bees and hoverflies and increase fruit by 10 per cent.