The man who wants to drag environmentalism back to nature 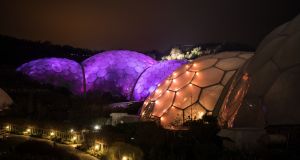 The Eden Project in Cornwall: the botanic garden’s co-founder Tim Smit believes we can save ourselves and the natural world if only we would jump out of our comfort zones. Photograph: Matt Cardy/Getty

Tim Smit, co-founder of the marvellous botanic gardens in Cornwall called the Eden Project, is the perfect antidote to the depressing statistics about species decline, biodiversity loss and climate change catastrophes that have been making global headlines over the last few weeks.

In Dublin during November to speak at the EPA/HSE environment and health conference, the former archaeologist and music promoter travels the world spreading his optimistic and iconoclastic vision of how we can save ourselves and the natural world if only we would jump out of our comfort zones.

He peppers his central message – that we are a part of nature and not apart from it – with plenty of personal anecdotes and lots of snide remarks about how the establishment is getting it all wrong.

“We are at a point where science has now confirmed the interconnectedness between the human microbiome and the microrhizomes in the soil. Science has revealed the absolute majesty of the bacteriological world inside us and the breathtaking understanding of what’s going on in the soil. Scientific explanations like these will underpin a spiritual renewal,” he says.

Taking the analogy of the dying tree that pushes out one last great surge of leaves and blossoms, he says that Brexit, the Trump administration and right-wing governments in countries such as Hungary are symptomatic of the “dying days of nationalism” which will be replaced by a global citizenship and spiritual regeneration.

He admits that his aim – in his public speaking engagements – is to provoke and inspire people to “disrupt” the status quo and move out of the “beige” zone he says universities, policy institutes and even environmental non-governmental organisations are locked into.

“It’s about taking action. It’s about taking risks. It’s about understanding the strategic intersections so that you can see the whole picture. We need to get back to a wider exploration of ideas that happened when scientists were natural philosophers who worked more closely with writers, artists and engineers,” he says.

As an example of activism, Smit says that he’d like to take all the glass boxes of stuffed animals from the Natural History Museum in London and place them along the street so everyone could see them. Gestures like this, he believes will jolt people into taking on board the sharp species decline that scientists and environmental NGOs are publicising.

Smit has been developing or reclaiming wild spaces since he moved to Cornwall in 1987 – first to undertake the restoration project at the Lost Gardens of Heligan, near St Austell, and then to co-create the magnificent botanic biomes in a former china clay pit that became the Eden Project.

“The basis for the Eden Project was to bring all the plants that we depend on together in one place. Without plants there is no life on Earth,” he says.

Described by some as the “eighth wonder of the world”, the Eden Project has, since it opened in 2001, been part of a re-invigoration of the Cornish peninsula. Latest plans include building a 109-bedroom sustainable hotel at the site by 2020.

Smit is also leading the team at Eden Project International to develop up to eight Eden-style projects in Australia, New Zealand, the United States, China and Northern Ireland.

“Eden’s mission is to explore our dependence on the natural world, to use that understanding to excite people into delivering transformation where they live and to ask really serious questions about what a great future might look like for all of us,” he says.

Clearly inspired by the Eden-style projects in China, Smit says that the Chinese are the antidote to the doom and gloom messages of climate change. “Their president, Xi Jinping, lectures at agricultural colleges. He says [things like] ‘heal the soil, and we will heal our souls’ and while the Chinese are completely aware of the damage they have done to the environment, they believe they are clever enough to repair it. They see farms as centres for mental health recuperation,” says Smit.

He suggests the Chinese have a “form of neo-Taoism – a kind of capitalism with a moral dimension in that they are working for the common good”.

“More trees were planted in China in the last four years than in the rest of the world put together,” he adds.

Large-scale botanic gardens in China include the Qingdao Eden Project planned around the theme of water for the city of Qingdao on the east coast of the country. Due for completion in 2020, it will be built on an area of reclaimed land originally used for salt production at the confluence of two rivers in the coastal city.

Another Eden Project on the theme of ecological restoration and soil is planned for the historic city of Yan’an in northern China. A project with education and training programmes for adults and children is planned for the Sheng Lu vineyard in Beijing.

And, he says, the Northern Ireland Eden Project is planned for the banks of the river Foyle in Derry city. The project there is based around a old stately home and the Boom Hall and Brook Hall housing estates . The plan is to restore a historic landscape and develop a series of walled gardens for learning and play.

“I think the river Foyle is one of the most beautiful rivers in Europe but incredibly all the smart houses face away from the river in a place that luck has left behind. The plans there now are to create seven miles of beautifully designed footpaths and three enormous walled gardens, a playground and covered spaces for educational programmes,” he explains.

The key to successfully engaging people with the natural environment is, according to Smit, to go to where most people are and not where we think they should be. “Then, you make it cool to be where they are,” he says.

Leaving delegates to go back to their usual diet of scientific presentations, Smit shoots off to meet former president and climate justice advocate Mary Robinson. He might not be recognised on the streets of Dublin but this half Dutch half English man is on a mission to move mountains and encourage others to do likewise.

Head-shaving, rape, murder. Atrocities against women in the ‘Tan War’
6