A guide to recognising common Irish trees in the winter 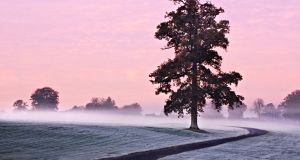 A woodland in late winter may seem a dreary place, almost by definition. And compared to the delight of seeing the emerging succession of spring flowers, the gorgeous leafiness of summer, and the fiery colours of autumn, winter is certainly a quiet time among the trees.

But that quiet need not be melancholy; it can be calming, enchanting and fascinating in its own way.

This is especially true when you begin to ask more questions about what you are seeing. You can, with a little enjoyable detective work, recognise familiar common trees even when they are not wearing their distinctive leaves or flowers.

The delicate tracery of bare branches etched against the sky is not only very beautiful, it offers subtle clues to identification. You may find that the absence of leaves not only opens broader and deeper woodland views than you could ever enjoy in summer, it reveals details that the distractions of the other seasons cover up.

The more closely you look at a winter woodland, it also becomes clear that this is not a ‘dead’ season. Life moves more slowly, but still moves. Some trees, however, are already moving fast, in flower already, adding discreet drama to deep midwinter.

To learn a little about how to pick out diverse species at this time of year, I went to Ballygannon wood in Co Wicklow, with Declan Little. He is an ecologist who worked on restoring native woodland on this Coillte site for the People’s Millennium Forest project 20 years ago. He is now project manager of Woodlands of Ireland.

Ballygannon had been an old plantation for timber extraction, with fine mature sessile oaks, but also introduced species like beech, as well as evergreen spruces and firs.

The plantation trees were planted closer together than they would grow in nature. This has constrained them from spreading their branches. They grow tall and straight, producing the best timber, but lose their most distinctive shapes.

Around the edges of the restored native woodland, much of the old plantation species can still be seen. Inside, behind a deer fence, the finest mature oaks remain, but most of the introduced species have been removed. So there is space for a profusion of young natives: oak, birch, willow, hazel, Scots pine and an occasional mountain ash, which can all thrive on this poor acidic soil.

The game of identifying

The contrast between these two types of woodland, with overlapping species but contrasting spatial and age structures, makes the game of identifying species more challenging.

The old oaks are fairly easy to recognise. Their bark has obvious vertical fissures, creating a distinctly corrugated surface. The veteran beeches, in contrast, have smooth grey bark, often tinged with bronze, smooth as paper, unless they are disguised by a layer of moss.

Where either species has found room to expand towards their full breadth, further distinctions become visible. The oak typically has a generously broad and disorderly crown, somewhat resembling a stag’s antlers, as Little points out. The beech has a neater, narrower dome.

The younger trees versions, however, are not as easy to distinguish. An oak sapling’s bark can be quite smooth and silvery, with no sign of fissuring.

“You have to get a look at the twigs and buds,” says Little. Oak twigs are robust, and the buds at the end thick and rough. A beech twig, on the other hand, is fine, and the alternating buds are small and slim.

With experience, these contrasts can also be observed in the high crowns of mature trees. A beech shows ordered, cleanly etched patterns, while the oak is, as Little puts it, “unruly,” the mass of small branches and twigs a scribble of irregular angles.

The overall shape of the tree is also a good way to tell young oaks in the native woodland from young birch, where both are often growing side by side in dozens. (We don’t attempt to distinguish the two birch species, downy and silver. It’s hard to do so without their leaves, and they also hybridise promiscuously.)

The birch’s branches tend to be held almost parallel to the trunk, unlike the oak’s. And where their twiggy ends are massed together, in most lights they give off a pink-red haze. The peeling “paper” bark is also a giveaway.

Another tree flourishing in the native forest is the Scots Pine, but again the young are very different from the very distinctive mature tree, which has reddish bark, well exposed because it loses most of its lower branches, so that its crown is an untidy, isolated tuft.

The younger pines, however, can look very like the familiar commercial conifers. They can best be recognised by examining the needles. They are held in pairs by a little sheath, while other pines might have three, four, or even five in a group.

We find a single greyer tree among the young birch and oaks, and its irregularly scattered groups of small vertical fissures help tell Little it’s a willow. This means, of course, that its buds will soon produce the familiar ‘pussy willow’ catkins, but that’s not immediately obvious now. However, he points out that its buds are much more closely spaced than those of adjacent trees, and that its twigs are exceptionally flexible.

As we finish our walk, I ask about the common native trees we have not seen at all: ash for example. This is a tree that’s exceptionally easy to recognise in winter because of its thick black buds, contrasting with its handsome grey bark, and its heavy seeds hanging, as is often said, like “bunches of keys”.

The soil is too poor, Little says, too acidic. He stresses the need for anyone planting native woodlands to “follow the ecological signature of the site, rather than attempt to maximise biodiversity by planting lots of species”.

As always in nature, it’s the ground we are standing on, with its mineral qualities and teeming microscopic life, that determines the type and quality of the forest we are walking through.

Even the bleakest winter walk is often illuminated by a cascade of yellow catkins. Other trees, willow and alder among them, will soon also bear these striking flower heads. But it is the humble hazel that provides the year’s first big burst of colour.

And while the hazel catkins sing out their presence loudly, they are only one of half of this tree’s striking floral repertoire.

Each catkin is an elongated hanging basket of many tiny flowers. The more they open, the yellower the catkin, as the flowers’ bright pollen is exposed. It then blows away in search of a chance encounter with a female flower, to produce hazel nuts in autumn.

But where are these females flowers? You could be forgiven for looking long and hard at many hazels and never finding any.

But if you look again – and here a hand lens is essential to get the detail – you will find small buds, easily mistaken for leaves in waiting. Tiny but vividly red styles (the female sex organ) emerge, rather like the tendrils of a tiny sea anemone.

The future of the hazel depends, every year, on these petals capturing a speck of wind-blown pollen. It’s a small drama, to be sure, but one worth seeking out.