The wheel deal: doing the Malin to Mizen cycle 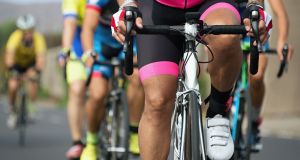 The attraction of cycling is not only for people retiring from other sports, but also for those seeking an outlet where they can push themselves physically and mentally but relatively safely. Photograph: iStock

Bags of nuts – check. Overshoes – check. Energy bars – check. Sunglasses – check. Sun cream – check. Wind/rain jackets – check. Large tub of “chamois” cream (bum cream to the uninitiated) – double check. The list goes on and on, a bit like the trip we’re about to embark on.

It’s past midnight and I’m still packing for the biannual Kilmacud Crokes Wheelers’ Malin to Mizen cycle. Despite completing the Mizen to Malin version two years ago, I find the thought of covering 650-plus kilometres again over four-and-a-half days is still somewhat daunting.

From conversations with others and our overactive WhatsApp group, I know I’m not alone. Seventy-odd other cyclists are also wondering if they have sufficient training done . . . If they will be able to keep up with the group . . . If their knees, wrists, ankles or even their minds will be able to withstand the rigours ahead.

The aim of the cycle – the fourth so far – is to raise funds for Breast Cancer Ireland (BCI) as well as the Kilmacud Crokes Development Fund. One of the key founders of the cycle was Paul Gallagher, who lost his wife Marie to breast cancer in 2007. She was 44. Paul and a small circle of friends wanted to continue to raise funds for BCI while also giving something back to the local community.

The attraction of cycling is not only for people retiring from other sports, but also for those seeking an outlet where they can push themselves physically and mentally but relatively safely.

With 73 cyclists taking part, a lot of organisation is involved. In the club car park at 5.15am a committee member is carrying two sleeping bags under his arm. There’s talk of an accommodation squeeze in Kenmare for the Bank Holiday weekend. During the five-and-a-half-hour bus trip north to Malin Head I make a mental note to buy him a pint at the earliest opportunity.

The bikes have been trucked up in advance and stand waiting for us under glorious sunshine in Malin.

Not many people in our group – or the wider population for that matter – can pull off our pink lycra bike gear look with aplomb. So with the exception of some veterans who remembered to opt for gear two sizes north of what they usually wear, most people’s outfits, including my own, can best be described as snug.

With the adrenalin rising almost as fast as the mercury, the groups are keen to hit the road. This is why most accidents happen at the start of a cycle, when people are giddy or distracted, or at the end of the day, when they’re tired and losing concentration. On the trip we have four motorcyclists, three support vans and a jeep to provide vital support. And so the five groups set off separately from the top of Malin Head to begin our journey south.

Downhill from Malin to the curiously named Five Fingers Strand and out over Trawbreaga Bay across to Doagh Island, the views are breathtaking. Mind you the same could be said about the pace our group has set and, as we zip along through Carndonagh and on to Buncrana, there are a few shouts of “take it back a notch” and “it’s a marathon not a sprint”. Okay, that was me.

After a nice uphill drag outside Letterkenny and a pause to catch our collective breath, a man doing a bit of gardening comes over for a chat and wishes us well. This interest and friendliness is a recurring and endearing feature of the trip.

On a trip like this, cyclists burn between 4,500 and 5,000 calories a day so fruit, porridge, the full Irish can all be consumed without a twinge of guilt. Day two is one of the longer days and the constant rain falling ensures the morning will be a long, wet slog.

With limited views to distract us, the group can focus on working together in a peloton. This involves everyone taking a turn at the front – the most demanding position – for equal periods before being “recycled” through the group in a revolving chain until it’s their turn at the front again. Naturally, being at the back is where you receive most shelter and expend least effort. It’s a popular spot.

While professional cycling has been riven with stories of drug abuse, for KC Wheelers the stimulant of choice has long been the humble “99”. No day is complete without one and today’s ice cream infusion powers us down the N17 and up the long drag past Knock to our finish in Claremorris.

In the morning our team leader says that such has been the performance of the group to date that he would like to reward us with an extra 20km around Black Head and down the Clare coast to Lahinch – 150km in total. It’s another beautiful day for cycling and no one demurs. As a Clare man, I definitely can’t.

After lunch in Kilcolgan everyone is happy to be off the main roads and travelling through the wonderful scenery of south Galway and north Clare. There are a couple of steep climbs up from the coast and everyone is relieved to finally see the entrance to the Cliffs of Moher and to freewheel all the way into Lahinch. After a refreshing dip in the sea we adjourn to the pub for refreshments.

Everybody is a little bit quieter this morning, most likely due to the previous night’s refreshments and the knowledge that we are facing into the toughest day. We need a lift. Luckily the parents and family of one of our cyclists, Pat Burke, are on hand to provide just that with a wonderful reception for all in Quilty, Co Clare. Recharged, we shoot onto Killimer for the 11am ferry to Tarbert.

Everyone – well, I hope everyone – is feeling the burn and fighting their individual battles to keep pedalling even as their bodies are screaming stop. Winning those battles – that’s what it’s about.

After negotiating the bank holiday traffic of Killarney we soldier on towards Moll’s Gap. As we arrive at the summit the heavens open. We’re wet, tired and cold. Because it’s impossible to get accommodation in Kenmare for 80-plus people on a Bank Holiday weekend we are leaving the bikes in Kenmare and being bussed to Glengarriff. The logistics of Glengarriff probably merit an article in their own right. Suffice to say those sleeping bags saw action.

We are bussed back to Kenmare in the morning to pick up the bikes for the last time. At this stage we have seen the Caha Pass from almost every conceivable angle. All that remains is to actually cycle over it in the early morning sunshine.

The descent is amazing, with fantastic views of Glengarriff and Garnish Island below. After coffee in Glengarriff we shoot over to Bantry for an early lunch before heading out towards Durrus and the splendid views of Dunmanus Bay. Today’s obligatory ice cream stop is in Goleen and after that it’s up to Barleycove for assembly and the final spin on to Mizen.

For most of us, elation at arriving mixed with relief at completing the trip are probably the overriding emotions as we are clapped in by the preceding groups and support teams. Of the 73 cyclists who took part, about 20 were doing it for the first time. Twelve of these started on a zero to 50km programme for beginners just last January. Overcoming the challenges while having some fun along the way – that’s what these kinds of cycles are all about.

Kieran Garry is a PR consultant with Gordon MRM. The fee for this article will go to Breast Cancer Ireland/Kilmacud Crokes Development Fund.

The McWilliam Park Hotel in Claremorris

Hops well into the night. Yes, we stayed too late.

Excellent location and great service in a family-run hotel

Music in the bar and great food and service on a Bank Holiday Saturday for 80-plus people. Renowned for its chowder

Kathleen Connolly and her husband are great hosts. Fantastic views from the diningroom.

Ireland is fairly well serviced for food on the go, but we got excellent soup and sandwiches and a warm welcome at Sligo Junction, Collooney, Co Sligo and Mother Hubbards, Kilcolgan, Co Galway. Special mention to Fr Casey’s GAA club in Abbeyfeale for their great welcome.

While cycling isn’t an overly expensive sport, as with any new activity there are some initial start-up costs. Newcomers should look at getting a decent starter model for around the €1,000 mark, and they can save money by doing it through the Bike to Work scheme. Full details at www.biketowork.ie/

If after a couple of months you think cycling is for you, a professional bike fitting might well be in order. This is to ensure that everything from the saddle to the pedals to the handlebars to the cleats on your shoes are correctly aligned. While €100-€150 might seem pricey, it may well save you the hassle and cost of physio sessions down the line. Aidan Hammond in Kilmacanogue is highly rated. bikefittingireland.com

Before you head for the hills, puncture-resistant tyres would also be a good buy.

Sportives are open-to-all, organised cycling events. They take place regularly in Ireland and vary from the very well-known – and very quick to get booked out – to more low-key local events. Entry fees vary accordingly. Further details on all sportives and charity cycles at cyclingireland.ie or irishsportives.ie

Fixer-upper Gothic castle to call your own for €2.75m
2

Meghan Markle on George Floyd killing: ‘The only wrong thing to say is to say nothing’
3

Villa oasis by the Forty Foot in Sandycove for €1.95m
8