London could become a park city. Could Dublin follow its lead? 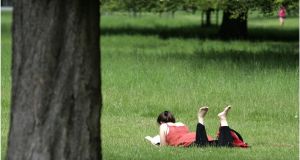 A Sunday morning in the Phoenix Park. The Dublin park is bigger than all London’s parks put together, and twice the size of Central Park in New York. Photograph: Dara Mac Dónaill

British explorer and geographer Daniel Raven-Ellison is campaigning to make London the world’s first national park city. The project, which has the backing of London’s mayor Sadiq Khan, wants London to be physically greener with more wildlife – and to be viewed as an ecological centre as well as a political, cultural and financial one.

Raven-Ellison, who founded the Greater London National Park City initiative, describes it as “a big geography project” in which semi-protected areas are part of a patchwork of formally and informally protected areas in the city.

With 47 per cent of London already made up of green space, the project is arguably as much about the branding as it is about any changes to the way Londoners already interact with their city. But crucially it taps into the zeitgeist of urban dwellers’ increased desire (and physical and psychological need) to connect with nature and spend time outdoors – doing sporting or cultural activities in more harmonious neighbourhoods – in an ever more urban world.

Half of all the species in Ireland are within the M50

Has Ireland’s capital the credentials to be a “national park city”? Are we ready to protect and benefit from nature in shared urban spaces as well as in designated rural national parks?

Environmentalist and author of books including Wild Dublin: Exploring Nature in the City, Éanna Ní Lamhna believes Dublin already measures up as a place where wild spaces and wildlife exist.

“Forty-five per cent of the land inside the M50 is green space – 20 per cent is parkland and 25 per cent is people’s gardens,” she says. “Half of all the species in Ireland are within the M50 – from bats, badgers, foxes and stoats to fallow deer and birds.

“Dublin Bay is an Unesco biosphere with some of the highest numbers of wildfowl and wading birds in the world, and we’ve got freshwater habitats on the Liffey, Dodder, Tolka and Grand Canal and Royal Canal.”

Jenni Roche, the co-ordinator of the Unesco Dublin Bay biosphere, says that the designation already fulfils some of the aims of the London National Park City initiative.

“We have 330,000 people living within the Dublin Bay biosphere which is an area of environmental and ecological significance. This large urban centre with a high population gives us a great opportunity to raise awareness of biodiversity and climate change in a more tangible way.”

Leslie Moore, Dublin City parks superintendent, suggests that Dublin is already doing many of the things that London sets out to do in its national park city initiative. “The UK is good at branding and marketing, and perhaps we should do more of it,” he says.

Moore cites the Dublin Mountains Partnership, with new walking routes and zip lines as recreational amenities put in place with Coillte, the National Parks and Wildlife Service and the Dublin local authorities.

In terms of Dublin city centre, Moore says that Dublin City Council’s “Greening the City” initiative includes developing more inner-city parks and adding trees to parts of the city where there are very few.

“Weaver Park in the Liberties which opened in 2017 was the first new park within the two canals in 100 years, and planning is now in place for Bridgefoot St Park too.

“We’re also planting hedging in the middle of the roads near St Patrick’s and Christ Church Cathedral, and there’s a wildflower meadow on top of the Civic Offices car park,” says Moore.

The Croppies Acre 1798 Memorial Park on Wolfe Tone Quay (in front of the National Museum in Collins Barracks) reopened to the public in June 2016. As well as providing amenity space for inner-city communities, converting derelict or abandoned spaces into parks also reduces anti-social behaviour.

Moore says in Dublin the river valleys of the Liffey, the Camac, the Tolka and the Dodder act as wildlife corridors, and new greenways provide pedestrian and cycling routes through linear parks in the city.

Moore says that the national park city concept in London is part of a wider environmental strategy to improve air quality and water quality.

So, rather than setting our sights on branding Dublin as a national park city, maybe we should follow London in another way and introduce a congestion charge – which would certainly improve the quality of life for humans and wildlife in our capital city.

Phoenix Park: The biggest enclosed park in any European capital city, the Phoenix Park is twice the size of Central Park in New York. Visitors can hire bikes at Phoenix Park Bikes, located at the Parkgate Street entrance to the park. Single bikes cost €6 per hour. Tandem, electric and children’s bikes are also available. Tel: 087 3799946 or email info@phoenixparkbikes.com

Walks and talks in Phoenix Park: There are monthly talks on the wild pollinators in the Phoenix Park Visitor Centre, followed by a Bumblebee walk (weather permitting). The next ones are on June 24th and July 29th at 2pm. You can also join themed walks on Wednesdays from 11am-12.30pm. Forthcoming themes are mammals (June 27th), butterflies (July 4th) and monuments (July 25th). Members of Birdwatch Ireland will lead a tour of Ashtown Demense in the Phoenix Park offering tips on bird-friendly gardening on Sunday, June 17th, at 2pm. An evening walk to see wildlife in the park goes ahead on July 11th at 9pm. Booking essential on 01-6770095. Phoenixpark.ie

Children’s eco-summer camps in the Phoenix Park: Eco-Unesco runs these camps on Tuesdays and Thursdays in July from 10am-3.30pm each day in the Phoenix Park Visitor Centre. Children will learn about the trees, flowers, animals and heritage of the park. Cost: €10 per day. Booking essential on tel: 01-6770095.