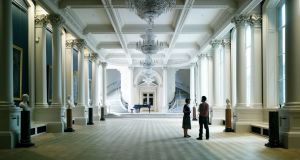 Renovated Shaw Room at the National Gallery of Ireland. The gallery was the most visited free attraction in 2017. Marie-Louise Halpenny

A pint of plain remains your only man for bringing the tourists in, with the Guinness Storehouse once again proving to be the most popular fee-charging visitor attraction in Ireland.

Trips to the Dublin 8 site jumped by over 60,000 to more than 1.7 million last year, according to figures released today by Fáilte Ireland.

A painting or two by Carvaggio or Vermeer is not too shabby either, with the master painters helping the National Gallery of Ireland top the list of ‘free to enter’ attractions, to surpass the one million visitor mark for the first time.

The reopening of the gallery’s permanent collection halfway through the year and the two major exhibitions of Caravaggio and Vermeer saw its tourist numbers jump by 41 per cent in just 12 months.

The tourist authority’s annual list of Ireland’s top visitor attractions points to another bumper year with most of the destinations – both free and fee-paying – recording strong growth over the course of the year.

All told, 1,711,281 visitors walked through the doors of the Guinness Storehouse last year, up 64,000 on the previous year. With a full price adult ticket costing €19.50, revenues from ticket sales alone is likely to have topped €30 million.

The Cliffs of Moher and Dublin Zoo came in second and third place in the same category. Just over 1.5 million people travelled to Clare to look at the cliffs – up 7 per cent year-on-year – while almost 1.3 million walked through the gates of the zoo, up 10 per cent on a year earlier.

The National Aquatic Centre finished in fourth place on almost 1.1 million while the Book of Kells was seen by just under one million people.

The second most popular free site ws Castletown House Parklands which was visited by 666,000 people, while Glendalough, the Botanic Gardens and DLR LexIcon rounded out the top five free spots.

“Fáilte Ireland invests in new and compelling attractions throughout the country because we know that they bring visitors from around the world to our shores,” said Fáilte Ireland’s Director of Product Development, Orla Carroll

“Over the course of 2017 alone, Fáilte Ireland provided capital funding of over €22m for a variety of tourism projects, helping to drive growth in every part of Ireland for the coming years. With continued investment like this, and through our work with partners across the country, we look forward to ongoing growth for tourism and to seeing new sites feature on the top attractions list.”

Fish and chips: How to cook them just like the chipper does
6

What happens if a tenant can’t pay rent during the Covid-19 crisis?
Real news has value SUBSCRIBE