The food’s not great, the queues are long, but the Legoland is Windsor is fantastic 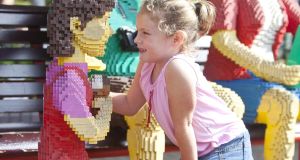 “Look at that Lego mariachi band!”

“I want to go on the Lego rollercoaster now!”

“Oh wow, a Lego Death Star being blown up by Lego X-Wings while a life-sized Lego Darth Vader looks on.”

We were about 30 minutes into the visit to Legoland Windsor and my kids were already asking me to calm down. Take it in. Don’t rush through everything.

But here’s what I didn’t expect. I’d never previously been bothered by the idea of theme parks – never been to one, had zero interest in going. But I grew up knee deep in Lego bricks and it remains the most perfect cross-generational toy. You get a Lego set for the seven-year-old and pretty soon you’ve taken over and are focused on putting it together yourself.

And Legoland has that feeling too. For you. For the kids. You step up to a resort hotel that, clad in over-sized Lego bricks, would look utterly garish and ridiculous in any other circumstances, and from the Lego pit in the lobby onwards you just revel in the overwhelming Legoness of it all.

The experience begins with the Lego-themed bedrooms. We were in an Adventure Room which, like every room, lift and corridor in the hotel, cares not for restraint. They are utterly dedicated to the Lego theme from patterned carpet floor to decorated ceiling, from the talking lift to the Legoland toiletries (oh, you can bet we swiped all that).

Sure, it’s a multinational brand keen to wring every last penny out of the magic, but it’s hard not to feel giddy even while your wallet’s being squeezed.

The park itself is broken up into sections, over the years layering on the newer Lego favourites on top of the older ones. There are plenty of highlights of the sort you’d expect from a theme park. The rollercoaster that winds its way through the castle of the Knights Kingdom is just the right level of thrilling for even young kids. There’s a super 4D ride at Lego Ninjago World in which you shoot animated Lego dragons and immediately want to just do it again five times. And Pirate Falls is a leisurely water cruise that ends with your canoe sliding down a waterfall with a splosh and screams.

But the really enjoyable thing about Legoland is just how much of it you spend peering at small plastic bricks constructed in a variety of ways. The Star Wars display recreates its most famous movie scenes on an epic (for Lego sets) scale and, because it’s indoors, rescued us from a rainy morning.

The kids will spend far more time than you’d think simply making Lego at the Imagination Centre, as well as, inevitably, using screens to make digital Lego fish that swim off onto a huge digital aquarium on the wall.

And then there’s the small wonder of the world that is Miniland, a recreation of many of the planet’s most famous cities and landmarks in toy village form. And while it’s not a sight the youngest of kids will stand around in the rain for, I can vouch for the fact that this grown-up at least was very happy doing just that.

In all, the rides are very much aimed at the same level a decent Lego set would be – six to 12 years old – but there’s little that won’t satisfy most ages. It takes a couple of days for adults with older pre-teens to get through most of it without rushing, although that is based on days when queues are minimal. When it’s busy, Legoland’s queues are apparently a thing of legend.

A few things that could be better? The park food isn’t up to much, to be honest. The burgers we ate were flat and tired-looking and not much reward for what can be slow fast-food queues. There are other options including pizza, but outside of the hotel buffet don’t expect much gourmet for your sterling.

Also, if you go during the Easter break as we did for the second time this year, be prepared to see closed sections while the place gets its pre-summer make-over. We’ve been twice and the Duplo Valley water park hasn’t been open either time. It rained heavily this time around although, strangely, the kids complained about that particular drenching. The lovely small railway that chugs its way around the park was also closed unfortunately.

But in the couple of days of our recent visit, myself and my five-year-old daughters didn’t get everything done anyway so it wasn’t as if we were stuck for things to do.

At the public entrance to the park (the farthest point from the hotel), the park rises up on a hill and if the weather is too warm, too cold or too wet the youngest will need some encouragement. But once up there, they’ve got the Lego store. And for all that you might want to resist the big sell that Legoland inevitably is, it is impossible to avoid treating the shelf upon shelf of Lego sets almost like an attraction in itself.

Lego “Yellow Submarine” complete with mini-figure Beatles? A Lego “Ghostbusters” fire station? Lego “Women of Nasa”? It’s all not just in boxes, but pieced together to be gawked at and drooled over. It’s a reminder that there is no other toy like it. And none you’d be so delighted to be overwhelmed by for a couple of days.

Shane Hegarty is the author of the Darkmouth series. With his five-year-old twin daughters, he travelled to Legoland Windsor independently.

How to get there: Heathrow is the closest airport, and a 20-minute drive from Legoland Windsor and the nearby town.

Where to stay: The two resort hotels (it recently opened a Castle Hotel alongside the Resort Hotel) have package deals, including park entry and breakfast. At the time of writing a one-night stay at the start of July for two adults and two kids at the Legoland Resort Hotel, plus two days’ park entry, was £501. Legoland also offers packages with hotels outside of the park, or you could book your own local hotel and add day entry tickets (beginning at £32 per person).

When to go: The toughest thing about Legoland can be the queues. There is a Q-Bot system that, for an extra cost, let’s you skip ahead on the busiest of days. But there is another secret to avoiding the queues known as The Irish Academic Calendar. Twice we’ve gone the first week of Easter when English kids are still in school. We, and other Irish families with the same idea, have had the run of the place.

The Lego Ninjago 4D Ride: The undisputed hit with my five-year-old daughters. A car brings you through a sequence of 3D animations (with an added dimension of heat and wind) and you’ve got to use your hands to shoot computerised baddies. You’ll look very stupid doing it but it is fierce fun.

Miniland: For anyone who spent their childhood (and beyond) turning a pile of Lego bricks into houses, towers and cityscapes, you can’t but love wandering through Lego versions of everywhere from Copenhagen to New York in Lego. Every few minutes a Lego Space Shuttle launches from a Lego Cape Canaveral.

Atlantis Submarine Voyage: An underwater aquarium trip, complete with real sharks and Lego ruins. If you are not excited by a combination of Lego and an aquarium, there is something wrong with you.