Leaving our family’s holiday home in France after 20 years

Our love affair with this house and our holidays here started with excitement, anticipation and longing 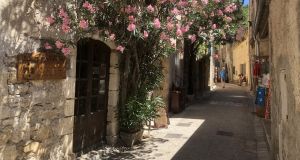 I suspect no door or beginning will match the one we and the kids opened that day in August 2000, as we stepped onto the terrace of our house in Herault

We are about to vacate our little holiday home in Puissalicon in the Languedoc, the one my wife and I and the kids and extended family and friends fell head over heels in love with in 2000.

Like any romance, our love affair with this house and our holidays here started with excitement and anticipation and longing. Even the old Irish Ferries’ Normandie ship and our long drives from Cherbourg with the kids in tow were once-in-a-lifetime adventures.

We enjoyed dolphins and sunsets of liquid gold on the Celtic Sea, and watched France change from the green familiarity of Normandy, to the dry golden other-world of the Mediterranean littoral. All along the way, the happy yellow faces of the sunflowers seemed to turn and dance and twirl in tune with our joy.

In those early years, we embraced with gusto the many little challenges of learning French, negotiating prices and deadlines for building works on the house, driving on the right and getting used to shops closing for hours around midday.

Years came and went, with countless trips to aqua parks and the beach, the kids jumping into rock pools and squirming over whole crabs served up in the fish restaurants of Cap d’Agde. But they grew up quickly and found other people and other places, and our Languedoc holidays lost some of the special excitement that only being around younger kids can bring.

The region of Herault is a special place: a micro-climate keeps temperatures pleasant year-round, geology bequeaths the loveliest of honey-coloured stone, and a long history of welcome and tolerance has bred the warmest of hearts in its people.

We were drawn, and most willingly sank, into a world of village fetes, wine tastings, music festivals, Bastille Day commemorations, recitals in ancient chateaux and chapels, and sociable gatherings with new friends, be they French, English, Australian and Swedish.

Along the way I discovered the magic of cycling. The warm, wooded foothills and high plateaux of the Cevennes to the north of our village became a wonderland to explore on two wheels with friends and family. The early starts sometimes constrained our summer night socialising, and our enjoyment of Puissalicon’s excellent local wine, La Croix Belle. But cycling through scented pinewoods, with stops for coffee and the occasional cold beer in the shady squares of tiny hill villages, more than compensated.

We explored the hinterland in every direction, extending further each year to Nimes and Narbonne, Avignon and Andorra, Girona and St Guilhem, Canigou and Collioure, Col de Mt Ventoux and the Col de Tourmalet, Perpignan and the Pont du Gard, and all the beautiful and story-filled places in between.

Over time, too, our house and the land and the people and the places of vines and stones and crumbling walls told us their stories. My neighbour, now sadly deceased, shared in hushed tones how his mother pulled him indoors when German troops abducted his friends from our friendly promenade, and shot them outside the village. We accumulated other stories of long gone Gallo-Romans and Greeks, of Visigoths, and even of a brief 40 years of Saracen rule.

But the most poignant of these stories, one soaked into the soil and stones and stout walls of the region, is that of the Cathars. These wandering “Good Men” and their followers came into this land from Constantinople and the Eastern Roman Empire in the 11th century.

We read books about castles and of a way of life ahead of its time; when rulers like the Counts Raymond of Toulouse and the Trencevals of Carcassonne regarded the happiness of their people as the purpose of their rule, and defied the pope’s demands that they put down the small number of “heretical” Cathars living peacefully among them.

We picked up the still strong resentment among Languedociennes towards the northern French of the 13th century, who came south on a “crusade” and killed thousands in Beziers, Carcassonne, Minerve and finally in the high fortress of Montsegur - all in the name of God.

We came to our little house in all seasons. We came in spring and saw the first warm days of March and April coax the most delicate green tendrils out of the bare, winter-black vines; and in late autumn we saw the same vine leaves explode into a beautiful kaleidoscope of reds and russets and crimsons, sometimes wrapped in wraiths of morning mist. We “suffered” the Canicule heat waves of 2003 and 2019, loved the most elemental of thunderstorms, and listened to birdsong on the stillest of blue and gold October days.

But now, we have signed the paperwork and must leave our beloved old house. We will say goodbye to our special covered terrace of past parties and songs, to our garden of figs and green plums, cherries and oranges, and the old well that predates the house by centuries.

People will talk of “new beginnings” and another “door opening”, but I suspect no door or beginning will match the one we and the kids opened that day in August 2000, as we stepped onto the terrace of our house on the Route d’Espondeilhan, Puissalicon, Herault.