Now, if I forget to bring a pair to the office, I’m liable to turn the car around 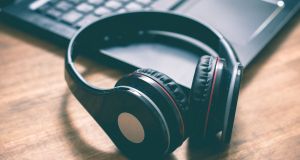 They’re suddenly everywhere. They crept up on us, completing the trajectory from edgy to essential in record time, like smartphones 13 years ago, or mullets and Converse in the 1980s.

You’ll spot someone browsing the bread aisle, apparently deep in conversation with themselves about how the tests all became negative, or how someone in their life has “become a lazy little fecker this year”. A second later you see them, protruding discreetly from the wearer’s ears like a pair of space age matchsticks.

I bought myself a pair just before Christmas. Not €300 AirPods but a cheaper, Chinese homage to them.

I still haven’t committed. I keep worrying they’re going to slip out, and when I push them back in, the tap of my finger ends my call, or pauses the podcast. I talk too loudly on them, not quite trusting that such a tiny microphone will really convey the passion I feel for the subject of whatever call I’m on. I think I prefer a more declarative set of headphones, a giant pair that sit on my head like a bright, white Do Not Disturb Sign on my imaginary office door.

Still, they’re a small miracle, these miniature, wireless earphones that are suddenly a ubiquitous part of the commuting office worker’s survival kit.

It’s only a few years since I remembering being worried that I’d seem less than committed if I wore headphones at work. Now, if I forget to bring a pair, I’m liable to turn the car around.

It is one of the strange absurdities of modern office design that it is so badly suited to all of the things it is supposed to facilitate: focus, collaboration, space, freedom. Things like work.

Face-to-face interaction in the office has all but vanished. In the tyranny of the open-plan office, headphones have become our new cubicles

As a piece in The Atlantic last year observed, the pitch from designers pushing the open-plan office in the early days was twofold. “Physically separating employees wasted space (and therefore money), and keeping workers apart was bad for collaboration.” The open-plan office promised to solve all of that at once.

It was, of course, a hollow promise. A study published by the Royal Society in 2018 found that, “contrary to common belief, the volume of face-to-face interaction decreased significantly (approx 70 per cent)” in corporate settings that recently transitioned to open-plan set-ups.

The researchers found that, rather than “prompting increasingly vibrant face-to-face collaboration, open architecture appeared to trigger a natural human response to socially withdraw” and send an email instead. The more tightly people are packed together, the more inventive they become about carving out some private space for themselves and others. Enter headphones.

Newsrooms have always been a bit different, tending towards the open plan even before it was a thing. My first job was in one that was fairly typical: a dusty space of newspaper mountains and DOS computers, where people bellowed into landlines and research involved hitting the phone, or wandering over to the desk of a more experienced colleague. The constant chaos promised its own kind of anonymity. It faded into a kind of white noise that made for the perfect backdrop for deep work and offered a degree of privacy. Or so you’d think.

One long-ago summer, I planned my entire wedding from my desk, making urgent calls to the then-boyfriend to discuss guest lists, the necessity of red carpets and sugared almonds wrapped in tulle. I must have done some work during that summer too, but I can’t remember any.

When the then-boyfriend came to join us for office drinks, the colleague who sat on the other side of our shared partition took him aside. Don’t go through with it, the colleague advised. She’s an absolute nightmare. (Reader, the then-boyfriend ignored him and went on to become the now-husband. And happily for all three of us, the Bridezilla phase was shortlived. Still, whenever we meet that former colleague, he looks astonished to see us together.)

We used to take it for granted that working close to someone necessitated becoming intimately acquainted with their views on tulle as an appropriate wrapping for sugared almonds, or listening in to their bedtime calls to their small children, or knowing that their partner was making cauliflower mash for dinner. Now that mobile phones and wireless headphones have made privacy possible again, overhearing more than a snatch of someone else’s conversation feels like an affront to us both.

But headphones have brought with them a whole raft of thorny etiquette dilemmas. If your colleague’s Air Pods are permanently in, is it appropriate to interrupt them? Is it more polite to tap them on the shoulder, or park yourself in their field of vision? It’s all so tricky, we just send an email instead. And so, face-to-face interaction in the office has all but vanished. In the tyranny of the open-plan office, headphones have become our new cubicles.