Lignum, Co Galway: The most exciting Irish restaurant, from a young team, in years 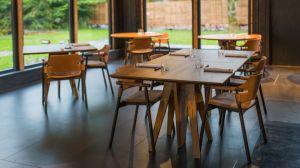 The lights around Lignum curve to the ground like quotation marks showing the way ahead. Any trees are lost in the ink of a winter night. We could be in a forest clearing or on an empty plain with just a few old-timer Scots pines creaking to tell the Atlantic gusts they’ve made landfall.

Lignum is in Bullaun outside Loughrea, a tiny village you’ve never heard of. Until now. Chef Danny Africano grew up here with his parents, who ran the family restaurant, Slatefort House, for nine years, until his dad returned to Italy in 2008 to take over his late father’s hotel. Their Loughrea-born mum joined her husband in Italy when Danny and his sister finished their education. A culinary arts degree in his back pocket, the young chef travelled to work in restaurants in Australia, Singapore and New York.

Now Danny is home, an apple that hasn’t fallen far from the tree. Lignum is Latin for wood. Nothing new really, you might think. Every restaurant that ever used typewriter font seems to have a wood-burning oven out back. But this is fine dining, folks, the kind of control-freak cooking rarely attempted without an array of digital read outs, Pacojets, sous-vides and a tidal wave of soy lecithin foams.

You pass the kitchen on the way in, with its domed oven where birch, ash and oak logs are burned to glowing embers lifted on to bricks on three separate cooking zones. There’s a small induction hob for sauces but otherwise it’s fire, a high-wire act at this level.

Lignum would look at home in Oslo or Copenhagen, a wood and glass lean-to on the side of an old stone stable, painted black and set out with generously large round handmade tables made from ash. The kitchen is behind a wall when you enter the dining room. The drama is the landscape outside.

It’s a place with all the energy and enthusiasm you’d expect when a restaurant child gets the keys to the kitchen. But there’s more heft and depth.

We eat luscious snacks of biscuit-crisp pastry, filled with a spill of liquified cheese

So there are no fussy deliveries of cutlery for each course on the €65 tasting menu. We each get a full supply of knives and forks in beautiful individual wooden cutlery boxes, made from brown ash. The same wood is used for a butter box holding chef Gráinne Mullins’s cultured butter. (Heartbreaking side note: these are artefacts of a dying species as ash die-back takes this precious tree from our landscape, one wind-blown spore at a time.)

We eat luscious snacks of biscuit-crisp pastry, filled with a spill of liquified cheese. There’s a horseradish tofu topped with feathery shiitake mushroom that will change your ideas about tofu. Sweet brown shrimp from Galway Bay spoon each other in a creamy bisque with parsley oil, served in a lidded bowl that feels like a hollowed out beach stone.

Squid is served in a puddle of lovage sauce covered with crimped ribbons of Savoy cabbage, with a squid-ink pâté all mineral sharp and beautifully judged.

There are tiny cubes of raw sika venison with an egg yolk jam and pickled garlic scapes instead of capers for the tartare finish. It’s topped with a potato tuille so delicate it almost floats.

Spectacular sourdough is made with a starter that used apples that grew on a family tree. Later, Danny will deliver a sustainably fished Connemara scallop, its shell filled with a tea-coloured game broth, hay smoked to taste like liquid campfire.

A celeriac plate puts this gnarly vegetable in matchsticks, rounds and the thready roots that typically get chucked. There’s cod basted over embers with a mushroom butter that tastes just as delicious as that sounds. There’s a juicy treat of 27-day dry aged duck with a swede, charred and sliced hasselback potato style.

Mullins’s desserts are astonishing. A cranberry sorbet is scooped out and finished with a teaspoon of olive oil which gels as it takes on the chill of the sorbet, like a scented candle in reverse. In her second dessert she spritzes a fine mist of whiskey over a stellar baked Alaska scorched Italian meringue filled with praline, candied pecans and hay ice-cream.

My only quibble is the lighting. It is a bit like being in a spotlight on a black box stage and needs softening down a few notches.

Homecomings are always heartfelt but there’s more to this one. There’s a Chinese saying about parenting your children: give them roots and give them wings. Lignum has both. It’s the most exciting Irish restaurant, from a young team, in years.

Dinner for two with kombucha and sparkling water came to €160

Valentine’s in an Irish restaurant: ‘Some couples barely speak to one another. Most don’t tip’
7

Ross O’Carroll-Kelly: ‘Sold to the man in the Ireland jersey with a bowtie tied around his neck!’
10