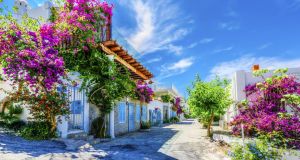 Bodrum is Turkey’s most famous resort, well known for its nightlife. Photograph: iStock

It was 5.45am on a cold summer morning, and we were part of a bleary-eyed group on the packed Ryanair flight to Bodrum from Dublin, the new route having only opened a month previously. Families, couples and assorted others were settling in for the 4½-hour journey to Turkey, many still half asleep.

Some were already in full holiday mood, including one woman travelling with her teenage children and mother. Geared for the beach in mini shorts and a barely-there top, she cheerfully knocked back the vodka and shared jokes with her mother a few seats back, while the rest of us looked on, cowed into awed silence.

She would not have been out of place in Bodrum, which attracts well over 1½ million tourists annually. It is Turkey’s most famous resort, well known for its nightlife. It once boasted the biggest disco in Turkey, the Halikarnas, with laser lights that could be seen 30km away (though it is now closed). Along the seafront, people party until dawn, and music throbs and pulsates relentlessly until five in the morning. Those wanting a quiet night steer well away from the mile-long harbour front called Bar Street, bound at one end by Bodrum Castle (well worth a visit, though its celebrated Museum of Underwater Archaeology is currently closed), and at the other by a luxury marina with cafes, shops and restaurants, with nightclubs in between.

From the sea, Bodrum presents a spectacular vista. It is built around two bays, and an ancient city once called Hallicarnassus, where an extraordinary monument, one of the seven wonders of the world called the Mausoleum, stood for 1,600 years before being destroyed in an earthquake (our own Lord Charlemont discovered it on his celebrated nine-year grand tour in the late 18th century). The excavation site, with its huge scattered columns, is well worth a visit, as is an inviting antique shop across the road, which is full of all sorts of intriguing and beautiful objects, and run by Sonny Ustabasi, a Turk who grew up in Wisconsin.

Other landmarks include a massive amphitheatre carved into the landscape high up on the hill, where concerts are held in the summer. On another headland, seven white windmills mark the place where Herodotus, the father of journalism, once lived.

But it was the man known as the Fisherman of Halicarnassus, who came here in 1925, who put Bodrum on the international map. Cevat Sakir, an Oxford-educated writer, artist and Turkish grandee, was sent into exile to what was then an impoverished village of fishermen and sponge divers. In the ’50s and ’60s, friends joined him on summer sailing adventures along the Gulf of Gokova and the Carian and Lycian coasts. In the area’s blue waters, surrounded by the majestic Taurus mountains, lie the densest concentration of Greek and Roman remains in the world, and he became a well-known tour guide, proud of the fact that it was in this city where his hero Homer had most probably been born.

Soon, Blue Voyages or Blue Cruises put Bodrum on the map, now one of the area’s greatest attractions. Highly regarded in Turkey, Cevat Sakir’s massive stone bust sits at the entrance to the castle. Although he would no longer recognise the city, his legacy is everywhere, even in the palm trees he planted along the seafront.

Today, a week’s Blue Cruise on a gulet – a traditional wooden sailing boat – is a wonderfully relaxing way to discover some of the places Sakir would have explored. I have taken these trips many times, and know no better way to unwind. On a recent excursion, we moored in English Harbour (where British naval vessels sheltered in secret during the second World War) within sight of a palatial seaside villa surrounded by a huge wall and massive spotlights, the summer home of Turkey’s president.

Even a day trip, very popular with tourists, gives a sense of the coast; you may be asked in Bodrum if you want a party boat or a quiet boat! Tours usually provide four stops in the clear turquoise waters for swimming or snorkelling, and a simple lunch. On the last one I did from Bodrum, the captain swam off at one stop and returned with a small octopus, which he slapped on a bald-headed Brit for a selfie before flinging it back into the sea.

Bodrum is a lively and cosmopolitan city, with endless covered bazaars packed with bags and clothes and designer rip-offs (“genuine fakes”), but it also has an enormous and impressive food market every Friday near the bus station where you’ll witness the scale and richness of local produce – the olives, the greens, the towering piles of watermelon and potatoes. Local stallholders, mostly women in scarves, long skirts and hand knits, seem in control of everything, many preparing delicious borek (thin slivers of pastry stuffed with spinach and sheep’s cheese). There is a textile market on Tuesdays.

From Bodrum, it’s a 15-minute bus ride to Bitez, a smaller resort along the Aegean coast, which is equally lively by day (although the music stops at midnight). The beach here is sand and shingle, and ideal for windsurfing, sailing, swimming and other watersports. The lovely olive and citrus groves are slowly giving way to more development, though you can still catch glimpses of vegetable gardens and livestock.

On an evening boat trip around the peninsula, the extent of such development was notable – an almost continuous strip of massive estates of white square boxes, their windows like eyes gazing down on the sea. Wherever there was a quiet bay or beach, they were there in great blocks, some in the throes of construction along what was once a pristine coastline.

Some places have retained their integrity, like Turgutreis, still a working port called after the fearsome and colourful Dragut, Suleiman the Magnificent’s greatest admiral and close friend of Barbarossa. There’s a new cycle path there, the first along the coastal route of the peninsula. Further along the way is the delightful seaside village of Gümüslük, famed for its seafood, pavilion-style restaurants, interesting stalls selling jewellery and clothes, and an enticing pastry shop called Firin Pastane. It’s a good place to see the sunset, so magnificent in this area of Turkey.

At Yalikavak, a luxurious new marina catering for mega yachts and super cruisers is already attracting an upmarket clientele, with designer shops and prices to match. I watched several dark-windowed limousines drawing up outside Party Paradise, a stylish-looking nightclub, discharging their well-heeled occupants. This was in stark contrast to a modest little beach bar a few kilometres further along the coastline called the Patato, now facing the speculative eyes of developers. A huge arena nearby once hosted traditional nomadic camel wrestling events, but has now relocated elsewhere.

For the city-stressed visitor, an absolute must is a hammam, a traditional Turkish steam bath dating back to the early days of the Ottoman empire. Mine took place in the Avalon Spa near Bitez, where owner Sadik explained the various treatments and massages. It starts with a hot sauna, “to clean out the toxins”. You are then led to a marbled room dominated by a huge marble platform, where you are scrubbed from head to toe with a hard mitt and washed down with tubs of water. A massage in a darkened room follows, then a restful period recuperating in front of a window, from which those seven white windmills can be seen.

The Turkish Riviera’s relatively moderate climate, and its dry north wind, called the meltem, means little or no humidity; its a breeze unlike anywhere else in the world. Whether you want to party like that carefree Dubliner on that cold morning flight, or simply unwind with a book by the sea, it will always call you back.

Ryanair flies twice weekly from Dublin to Bodrum until the end of October, and will resume in spring 2020.

Sunway offers all-in deals from €499 per person sharing including flights, transfers and seven nights’ self-catering in a studio room in Bitez. sunway.ie

An informative and entertaining book worth taking is The Fisherman of Halicarnassus, by Roger Williams

For a gulet trip, I can recommend Rota Yachting, based in Marmaris with an office in Bodrum. rotayachting.com