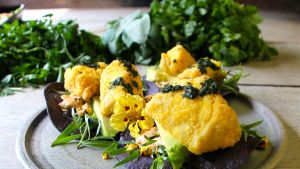 1. Put the pollock in a bowl and season generously. Sprinkle the polenta over the pollock, making sure each piece is evenly coated. Set aside. 2. To cook the corn, put a large pot of well-salted water on to boil. Once at a rapid boil, add the ears of corn and cook for five to eight minutes. Drain and pat dry. 3. Using a barbecue or gas hob, torch the corn over an open flame for two to three minutes each side, or until the kernels have an even char. 4. Remove from heat. Carefully remove the kernels by running a knife down the cob using a sawing motion. Set aside. 5. Make a chipotle mayo by mixing the mayonnaise with the chipotle paste and the juice of the limes. 6. Using a deep frying pan, add enough vegetable oil to cover the bottom of the pan completely. When the oil is hot, carefully add the tortillas two at a time, they should immediately start to crisp up and change colour. After two minutes, remove from the oil using tongs and set aside. Continue frying in batches until you have the desired amount. 7. Add your polenta-coated pollock to the same oil. Fry on each side for about three to five minutes until the polenta has crisped up and taken on a golden colour. 8. Assemble the tostadas by putting a dollop of chipotle mayo on each tortilla, then some of the pollock. Add a handful of rocket and coriander and sprinkle with the charred corn.