Floating Man, Liberland: A tiny festival in one of the world’s newest (and smallest) states

What happens when a Czech libertarian throws a festival on a scrap of land on the Danube? 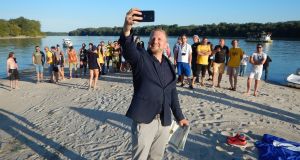 Mud, mosquitos and music – the original ingredients for a festival. Add in an airstrip, riverboats, cryptocurrency, Croatian police and a new micro nation taking its first baby steps and you get a better picture of Floating Man Festival, the newest festival on the circuit for the traveller who likes their adventure raw and untouched and their conversations peppered with political philosophy, and whose festival neighbours vary from nomadic world travellers to multimillionaires.

For those of you who have not heard of it, Liberland, officially the Free Republic of Liberland, is the latest in a series of emerging micro nations. Founded by Czech libertarian politician and activist Vít Jedlicka, it is an uninhabited parcel of disputed land on the western bank of the Danube, between Croatia and Serbia.

This area has remained unclaimed since the dissolution of the Socialist Federal Republic of Yugoslavia in 1991. In fact, for many decades, it has been uninhabited, and no claim was ever made to this piece of land. It was therefore Terra Nullius – a no man’s land – until Czech politician Vít Jedlicka and his partner Jana Markovicova proclaimed it as the Free Republic of Liberland on April 13th, 2015. The total area is approximately 7sq km and is now the third smallest sovereign state, after the Vatican and Monaco.

Application for citizenship is open on the website. So far, approximately 600,000 people from as diverse origins as North Korea to America have applied. For a new state to have an immediate diaspora of this size is impressive – for which the voluntary tax code may hold some explanation.

But, back to the festival. As it is the inaugural Floating Man festival there are some hiccups. Plans to have a large riverboat, The Liberty, fully fitted out are not realised and some of the guests have to travel in small boats. For smaller boats read no DJ, food or refreshments. The airstrip itself had an inspection the week before, and due to a missing micro payment, of around €2, flight displays are not permitted.

And that’s before I mention the weather – an unexpected deluge of rain on day two practically closed the access road, turning it into a slippery mud-covered pond which really needed four-wheel drive vehicles to navigate; intrepid festival goers without access to a jeep hiked 5km cross country.

But the first Floating Man was far from a flop. I compared it to the hiccups at the first Woodstock Music Festival in 1969, when the opening act, Sweetwater, got stuck in traffic and had to go on later. Joe Cocker’s performance had to be suspended for 40 minutes due to a thunderstorm, and the Grateful Dead’s set was cut short when stage amps overloaded.

Other similarities: Floating Man was not just about the music, it was a movement. Conversations then in Woodstock and now in Liberland focused on politics, human rights, the planet and how we live today.

Picture this: we are travelling on a flat riverboat on a canal off the Danube. We have met at a dock in Sombor in southern Serbia, the closest town to Liberland. The boat has seating for around 20 people, with a small wheel house at the rear. It is covered in the distinctive yellow Liberland flags. We are a motley crew, not as yet introduced, as we set off down the canal. Serbia is very warm in August, and swimmers as well as drinkers are on the dock. The locals have that casual approach to river bathing. The dock is wooden and unvarnished. They step in and out of the water with unstudied ease.

As we push off down the canal, which is green in colour and layered with dense vegetation on both sides, small private moorings appear on the right bank leading up to homes. These mini moorings are very rickety and charming. Local families appear and slip into the water to bathe. I am worried that the casual nature of these bathers will be caught by the boat’s engine, resulting in a terrible carnage. The wheel house is blinded by the canopy over the seats, but the bathers themselves swim back to the green edges and out of the path of the Liberty.

We see herons and smaller birds. The warm sun is now low in the sky, blinding everyone’s view. The assembled guests, as colourful as any Hercule Poirot cast, take selfies at the front of the boat. I have not got my river legs and eschew such dramatic shots for fear of falling overboard.

We carry on in these gentle waters with only the sound of the engine for company over several nautical miles following the curve of the canal. Then up ahead we see a dusty landing strip and Vít Jedlicka, the current president of Liberland.

The airstrip is flanked by great phalanxes of corn, a common crop in Serbia. There are tents and a platform. There is vegan goulash and Serbian sausages and Czech beer. There is even Liberland wine. Conversations begin and people start to mix.

Day one was to be an airshow, but the aforementioned official visit stopped that. Day two is presentations – cut short by the rain storms – followed by music. We drink and talk to fill the gaps, which is no hardship.

The music is an eclectic mix of styles, from troubadour poet to hip-hop, rap, and then blues. There is even some – what looks like – Irish dancing. I want to join but having never danced a step outside of the Gaeltacht, I abstain, though I could have if I wanted to. It is just that kind of place.

Day three is the cornerstone of the festival. We head back to the boats for a trip down the Danube to visit Liberland itself. I am on the main boat, complete with DJ, barbecue and refreshments. We have presentations (one of which I deliver on Women in Blockchain and Women in Liberland). We have a ceremony to commit the ashes of the president’s late father to the Danube.

As we approach Liberland, two hours into our journey, we are joined by Croatian police tailing us in small motorboats. They keep pace all the time we are in the vicinity of the disputed territory. As we draw close to the border we see police on the beach, dotted like lighthouses along the coast. We do not land. We are not arrested. Instead we arrive at an island on the other side and those who applied are presented with our official citizenship parchments.

This has been the inaugural Floating Man Festival. The camaraderie of the people – around 100 in total – is very evident. We have swapped stories and ideas and made friends. Next year there will be more planes, more boats and hopefully less mud.