Ten reasons to visit Trieste, Italy’s jewel of a city

Close to the border with both Croatia and Slovenia, Trieste is a city at the crossroads of cultures 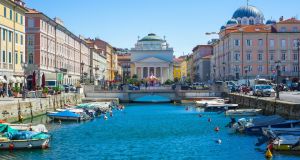 Trieste, Italy: The church of St Antonio Thaumaturgo is situated at the northern end of the Canale Grande.

Nestled in northeastern Italy and close to the border with both Croatia and Slovenia, Trieste is a city at the crossroads of cultures, a beloved refuge for many artists, and the uncrowned capital of Italian coffee culture. Here are 10 reasons to visit it right now.

With fairytale looks and Adriatic blueness surrounding it, Miramare Castle in the neighbourhood of Grignano is a splendid architectural masterpiece, and one of the most beautiful jewels in Trieste’s crown. It was built by Ferdinand Maximilian of the Habsburgs to be his quiet family residence far from the Viennese court. Finished in 1860, it combines the architectural features of Austrian, German and English castles. Take a tour inside to see Maximilian’s bedroom designed as the ship’s cabin, before meandering through the park filled with plants from all over the world. Well-preserved and almost untouched by time, Miramare Castle stands as a glorious reminder of the romantic past of Trieste. castello-miramare.it

Trieste is a renowned centre of coffee drinking in Italy, with 10kg of coffee consumed per person yearly, almost double the Italian average of 5.8kg. As historic as it gets, Caffè San Marco is a legendary coffee shop serving customers for over 100 years. Established in 1914, adorned by magnificent Art Nouveau frescoes, and frequented by bright literary minds including James Joyce, Italo Svevo and Umberto Saba, this cafe is more of a cultural institution than just an ordinary place to have a cuppa. Via Cesare Battisti 18, caffesanmarco.com.

The city’s cuisine is a blend of Mediterranean seafood-based dishes with meaty central European recipes. Antica Trattoria Suban is your best choice for authentic local meals. Founded in 1895 by Giovanni Suban, this restaurant is located at the outskirts of the city, close to the border with Slovenia. It has survived two world wars, and is still run by a representative of the Suban family. While you’re here, indulge in a traditional Trieste feast by sampling a cheese strudel, traditional sauerkraut and bean jota soup, and veal shin, accompanied by locally produced wine. Via Emilio Comici 2, suban.it.

There’s a bronze statue of a man at the picturesque Ponte Rosso bridge built over the beautiful Canale Grande. His posture is relaxed, and his eyes observe the Trieste harbour. The statue is of James Joyce, and the place where he stands is a couple of steps away from the apartment where he lived for more than 15 years, while teaching English at a local Berlitz school. Joyce has left his mark on the literary life of Trieste, and in return, the city stayed in the writer’s heart. It is here that he completed Dubliners, published Chamber Music and wrote Giacomo Joyce. To learn more about his life in Trieste, visit the Museo Joyce. Via della Madonna del Mare 13, museojoycetrieste.it.

There’s no better reflection of the city’s diversity than in its array of museums. For starters, there’s an impressive Egyptian collection (one of Europe’s biggest) featuring more than 1,000 exhibits, as well as a rich Roman history section at the Civic Museum of History and Art. The Museum of the Oriental Art features magnificent objects from Japan, China and India, while the Revoltella Museum of Modern Art presents a rich selection of art from the 19th and 20th centuries. Finally, there’s a modern Museum of the War for Peace, housing the collection of Italian pacifist Diego de Hernandez.

With strong Austrian and Slavic food traditions, you won’t find many pizza or pasta joints in Trieste. Nevertheless, there is a place to try great Italian pizza. Hiding away on one of the quiet backstreets in the central part of town, at Al Civicosei you may well have the best pizza of your life. This restaurant serves a traditional Neapolitan-style oven-baked pizza: simple, fresh and extremely delicious. Try the cheesy La Bufala with buffalo mozzarella, and the Marta, topped with Austrian-style würstel sausages. Via del Toro 6, Al Civicosei.

Being a part of the Austro-Hungarian empire, Trieste has numerous luxurious hotels in the city centre. Once a pearl of the Austrian Riviera, a maritime trade hub and a beacon for the rich and talented, Trieste has seen many beautiful hotels built on its streets throughout history. Savoia Excelsior Palace is where the Belle Époque can be felt most strongly, with its ornate interiors, riverfront position and magnificent Trieste Gulf views from the windows of beautifully furnished rooms. This hotel has been an obligatory rest stop for the international travel elite since its grand opening in 1911, and remains one of the best. Riva del Mandracchio 4, from €149 for a double, starhotelscollezione.com.

Trieste has stunning Adriatic views to offer, and the Barcola promenade is the best place to enjoy them. Swept by the intense Bora wind, this seafront walkway is a popular local outdoor spot dotted with small beaches and elegant parks, and provides the best vantage point in the city to watch the sunrise or sunset. Barcola can be easily reached by bus from the city centre; the promenade goes all the way to Miramare Castle.

This famous pastry shop has been serving locals and sweet-tooth visitors since 1836. With an elegant interior that has remained intact throughout its history, La Bomboniera provides a fascinating insight into traditional pastry making, still baked in the original wood-fired oven. There’s a dazzling selection of treats on display, but don’t leave without trying the putizza cake filled with nuts, Trieste-style presnitz, or the traditional pinza Easter cake. Via Trenta Ottobre 3, pasticcerialabomboniera.com.

It may be old enough to qualify as one of the “historic cafes” of Trieste, but Urbanis is quite the opposite. Perfect for both a relaxing aperitif on a warm summer evening or a lively night out accompanied by a DJ set, Caffe Urbanis caters to both young and old, serving great cocktails in a buzzing atmosphere. Enjoy an Aperol Spritz surrounded by 19th century mosaics and frescoes for a true taste of the Trieste way of life. Piazza della Borsa 15.

Get there: Fly from Dublin to Venice with Aer Lingus, or Dublin to Treviso with Ryanair. From both airports, it is a two-hour drive to Trieste.

It’s good to talk: the pandemic has brought this Irishwoman closer to home
9