Brussels is buzzing with Bruegel artwork to celebrate 450th anniversary 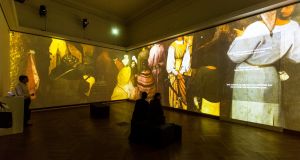 Bruegel Box: three of the artist’s painting are projected on to walls, floor to ceiling around you, at the Royal Museums of Fine Arts

Look carefully and you’ll find strange creatures hiding around the small church of Notre-Dame de la Chapelle, in Brussels. A tiny, wild-eyed and red-haired angel dangles above a crucifix, brandishing a long sword. At the base of a tall and austere marble statue, something shaped like a boiled egg with skinny arms and crazy hair wears an eerie grimace.

These are just some of the weird and wonderful characters created by the artist Pieter Bruegel the Elder, reproduced into colourful figurines. The idea is for children to spot them around this ancient church, where Bruegel was married and buried, and learn more about the painter and the paintings from which they have escaped.

You’d struggle to find this kind of fun in a sacred place in Ireland, or many other countries; here it demonstrates a refreshing approach to experiencing art outside of the traditional exhibition spaces. Though there is plenty of that too, as this year marked the 450th anniversary of Bruegel’s death.

Born 10 years after the death of the artist Hieronymus Bosch, Bruegel was often regarded as “the second Bosch” as he imitated the style and themes of his predecessor – though some would argue he later surpassed him. Brussels, where Bruegel lived for many years, is teeming with exhibitions, talks, walks and innovative interactive and multimedia events to commemorate his work, continuing into 2020.

Famously fond of gate-crashing weddings, Bruegel loved to observe people, and many of his paintings are exquisitely detailed in the fabric of ordinary, peasant life of the 1500s. At the Royal Museum of Fine Arts of Belgium there is the second largest ensemble of Bruegel paintings in the world – only about 40 of his paintings are preserved – with several on show for this special anniversary year.

The Fall of Icarus, which is part of the Brussels exhibition, is an interesting example of how central peasant life was to Bruegel’s work. At the foreground you’ll see a farmer pushing his plough against the backdrop of vast horizon; the two tiny legs of Icarus kicking out of the water in the distance, are easy to miss. Interestingly, there is now a question mark beside his name under The Fall of Icarus – once regarded as one of his most famous paintings, art historians are not now sure whether it was in fact made by him.

Winter scenes of town life are another of Bruegel’s themes, and his panel painting Winter Landscape with Skaters and a Bird Trap, is also on show in Brussels. This painting is full of movement, people out skating on the frozen river, birds flying above, the trees bare and the rooftops heavy with snow. To the side of the painting, however, is the suggestion of danger – a cluster of birds will soon be caught by the nearby trap. The transient nature of life – of the birds, and the skaters – subtly comes to meet the viewer.

Bruegel’s sons continued in his footsteps, creating many paintings that, at a glance, are indistinguishable from their father’s. Some of their work is also on show in Brussels and you can look for the many differences between, for example, Pieter II Bruegel’s Census at Bethlehem (1610) and Bruegel the Elder’s original Census at Bethlehem (1566).

After seeing the originals, head for the Bruegel Box – and I’d recommend you do it in this order – where three of his paintings are projected on to three walls, floor to ceiling around you. Here, the videos zoom in on the details – which can be difficult to get close to in the originals or see with such clarity – such as the villagers in Bruegel’s Proverbs or the palm reader in the Sermon of Saint John the Baptist. This a truly lovely experience, and proof of what the art historian Joseph Koerner once wrote: that any painting by Bruegel can “sustain a lifetime of looking”.

Continuing this multimedia approach is the Beyond Bruegel exhibition at the Dynasty Building in Brussels (until January 31st). Here, the sometimes nightmarish characters from the Fall of the Rebel Angels, for example, are seen on large screens and walls, this time with their arms, legs, wings or eyes moving eerily from side to side. The final room feels like you’ve stepped inside one of his paintings – which are projected all around – and gone right back into the wintery townlands of the 16th century.

Afterwards, you can raise a glass of the wonderful “Brussels Champagne” to the man himself. Unique to the Pajottenland area of Belgium, lambic is a sour beer made by an ancient method of spontaneous fermentation, which is then aged in large oak barrels. This effervescent, fruity and unique beer style has many fascinating variations and – like a Bruegel painting – could sustain a lifetime of appreciation.

For a full programme of events, see flemishmasters.com and visitflanders.com.