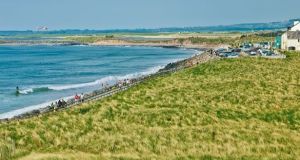 Strandhill in Co Sligo has been named the best place in Ireland for a health and wellbeing holiday.

The coastal village, renowned for its surf and seaweed baths, was awarded the title by Eden, an EU initiative recognising “destinations of excellence” for sustainable tourism.

Aoife Porter, of Strandhill Community Development Association, said the recognition followed a huge team effort involving businesses and people in the village to reduce its impact on climate change by adopting sustainable principles.

“We want this generation and the next to enjoy Strandhill’s world-class surf waves, unique landscape, thriving cultural scene and significant heritage sites,” she said.

“Our village is for everyone – for locals and tourists alike. It Is a village alive with a sense of community and a clear focus on health and wellbeing. This award is a testament to the fact that a community with one vision can be unstoppable.”

Fáilte Ireland announced the award at a ceremony in Sligo.

Eva Costello, of Fáilte Ireland, said it would “prove to be a magnet” in attracting more visitors to Sligo and to the Wild Atlantic Way.

“During the on-site assessments, Strandhill Community Development Association, as well as the other shortlisted destinations, clearly demonstrated how health and wellbeing has taken a central role in their tourism offering while also sustaining their local environment,” she said.